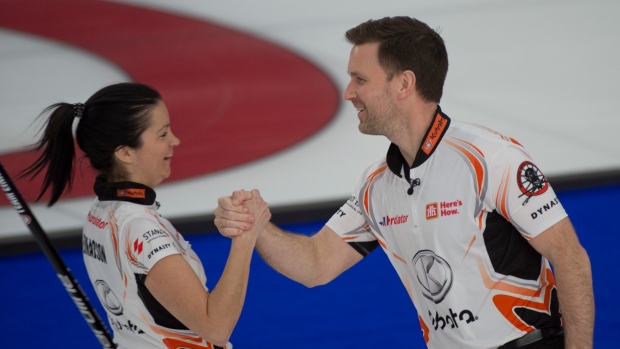 They'll plan to use the same technique when they represent Canada at the upcoming world mixed doubles championship in Aberdeen, Scotland.

"We had a lot of fun," Gushue said of the domestic playdowns in the Calgary bubble. "Even when we lost, we were having fun. Overall we performed really well.

"Now it's just a matter of trying to do that again and that's not going to be easy."

Gushue, from St. John's, N.L., and Einarson, from Camp Morton, Man., will open play Monday against Spain's Mikel Unanue and Oihane Otaegi. The Canadian duo is one of 20 teams entered in the May 17-23 competition at the Curl Aberdeen facility.

Gushue and Einarson will try to become the first Canadian team to win gold in the event’s 13-year history.

"I've been fortunate enough in my career to represent Canada now multiple times," Gushue said on a pre-event video call. "I know what the feelings are and the expectations."

The duo will be joined in Scotland by Heather Nedohin, who coaches Einarson's four-player team, and national mixed doubles program coach Scott Pfeifer.

Einarson's four-player team won the national women's title last February and earned a Grand Slam title last month. But they struggled at times in their first appearance at the recent world women's championship.

They finished with a 7-7 mark and were eliminated after a loss to Sweden in the qualification round.

"It's nice that I'm just coming off of a world championship so I know that feeling now and I got to experience that," Einarson said. "I'm really looking forward to putting that Maple Leaf on my back and walking out on that ice and doing what I love to do."

The top seven teams will earn mixed doubles berths for their countries at the 2022 Beijing Olympics. Canada's John Morris and Kaitlyn Lawes won gold when the discipline made its Olympic debut in 2018 at Pyeongchang.

Canada has reached the podium at the last three world mixed doubles championships.

Joanne Courtney and Reid Carruthers won silver in 2017, Laura Walker and Kirk Muyres took bronze in 2018 and Jocelyn Peterman and Brett Gallant won silver in 2019. Last year's championship was cancelled due to the COVID-19 pandemic.

Like Einarson, Gushue is the skip for his regular four-player team.

"I think our skill level is pretty high and we've just got to find a way to let that come across on the ice," Gushue said. "We're not going to out-sweep any teams but we can certainly out-shoot some teams, so that's the goal."

The 2021 field is split into two groups of 10 teams. Each team plays nine round-robin games, with teams vying for one of six available playoff spots.

The top team in each pool advances to the semifinals. The second- and third-place teams in each pool will cross over and play qualification games.

Semifinal losers will compete for bronze while the semifinal winners will play for gold.

This report by The Canadian Press was first published May 16, 2021.