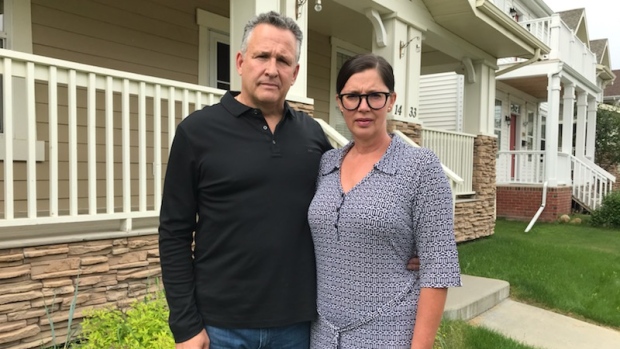 Warning: This story contains details that may be disturbing to some readers.

Former Western Hockey League player Brad Hammett is going public and joining a proposed class-action lawsuit against the Canadian Hockey League, alleging he was sexually and physically abused by four teammates over the course of two seasons, starting in 1981-82.

TSN first reported Hammett's story on Thursday and agreed to grant him anonymity. He subsequently decided he wanted to publish his story under his name, hoping that doing so might provide support to other players nervous about coming forward with similar stories.

WHL commissioner Ron Robison confirmed to TSN in an email that the league has spoken with Hammett and will investigate his claims.

A defenceman from Edmonton, the 56-year-old Hammett began playing in the WHL during the 1981-82 season with the Billings (Mont.) Bighorns. He says the abuse continued the following season after the franchise moved to Nanaimo, B.C., and became the Islanders.

Hammett said he told his wife, Kim, and his two children about the alleged abuse on Saturday, days after former CHL players Daniel Carcillo and Garrett Taylor filed a proposed class-action lawsuit in Ontario Superior Court, alleging the CHL and its three major-junior leagues have been complicit in hazing, bullying and child abuse.

“I’ve lived with this a long time, and my family has often wondered why I have had moods,” Hammett said in an interview with TSN on Thursday. “Talking about this, I feel there’s a weight off my shoulders. I know that it’s going to get better. I’m not hiding something.”

On Thursday, former OHL player Dan Fritsche told The Athletic that he was also abused while playing for the Sarnia Sting and that he is joining the lawsuit against the CHL. James Sayce, a lawyer representing Carcillo and Taylor, said he has been “inundated” with inquiries from former players since filing the case but said he can’t share details of any players who have joined the lawsuit until their affidavits are filed in court.

The CHL announced Friday that it is appointing an independent review panel to review its policies and practices related to hazing, abuse, harassment and bullying. The review comes amid allegations that some players are not comfortable reporting such incidents, the league said.

Hammett said that he never told WHL team management about the abuse he suffered because he was certain officials didn’t want to listen.

“I watched a teammate [defecate] in a purse belonging to a female team trainer and nothing happened to him,” Hammett said. “The nurse came into our dressing room, crying, and went right to the player, and he was back the following day, laughing about it. There were no consequences for actions. Nobody in team management wanted to hear about these things. They’d say, ‘You’re the weak one,’ ‘Boys will be boys,’ and ‘We keep things like this in house.’”

TSN is not naming Hammett’s alleged abusers because they have not yet been named in court documents.

Hammett said in his complaint to the WHL that he was attacked by a pair of Billings teammates during a road trip early in his rookie 1981-82 season. He said, after being pinned to a mattress, one of the players removed his penis from his pants and slapped it on the side of Hammett’s face.

Hammett said the abuse prompted him to quit the team.

“I grabbed my hockey bag off the bus, put it in the trunk of my parents’ car and said, ‘I’m going home,’” Hammett said. After eight games with Billings, Hammett played the remainder of the season with the St. Albert Saints junior team.

After the Bighorns were sold and moved to Nanaimo, Hammett rejoined the team in 1982-83 and he said the abuse resumed.

On another occasion, the same two Nanaimo teammates allegedly forced two rookies to strip naked in a dorm room and made them play a game of tug-of-war with a string tied to their penises. Hammett said he witnessed the abuse when he walked into the dressing room and demanded it stop.

Hammett said that days later, four Nanaimo teammates attacked him as he left the dressing room shower after practice.

Hammett played the following season with the New Westminster Bruins. He went on to play in the International Hockey League with the Kalamazoo Wings.