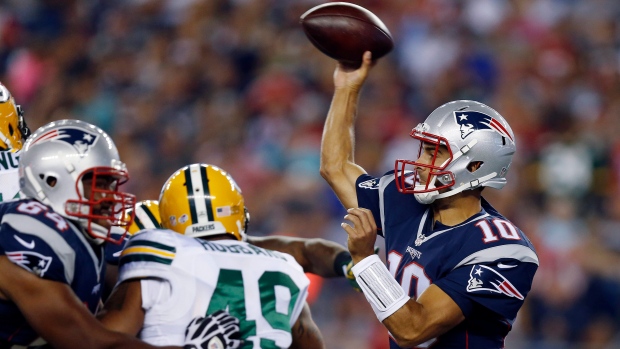 FOXBOROUGH, Mass. - Tom Brady had better hope his legal defence is better than his football defence.

The suspended Patriots quarterback hung around for one play less than a full quarter in the exhibition opener on Thursday night before giving way to Jimmy Garoppolo and watching as the Green Bay Packers beat the Super Bowl champions 22-11.

A day after appearing before a federal judge hearing the appeal of his "Deflategate" punishment, Brady completed one of four passes while playing just two series — a three-and-out and a four-and-out.

"Tom's a buddy. And he's going through some stuff right now," said Packers quarterback Aaron Rodgers, who spoke briefly with his New England counterpart after the game. "I'm sure we'll have a resolution here pretty soon."

Garoppolo, who would fill in for Brady if any part of his four-game suspension is upheld, played the rest of the way. He went 20 for 30 for 159 yards, no touchdowns and one interception, and was sacked seven times.

"I'm going into it pretty much the same way I would whether this was going on or not," Garoppolo said. "Whether you're the backup, starter, third-string or whatever, you have to have the mindset that you're the starter."

Rodgers completed 11 of 19 passes for 117 yards for Green Bay, which along with Seattle is the oddsmakers' favourite to win the Super Bowl — especially if Brady misses all four games.

Packers Backup Scott Tolzien was 10 for 16 for 107 yards and a 26-yard touchdown pass to Jeff Janis. Alonzo Harris ran for a 25-yard touchdown for the 2014 NFC North champions. Rookie Brett Hundley completed a 10-yard pass to John Crockett midway through the fourth quarter to give the Packers a 22-11 lead.

"My teammates picked me up when I was a little tense," said Hundley, a fifth-round pick from UCLA. "First NFL touchdown pass and to put (together) a drive like that against New England was an awesome experience."

Brady led the Super Bowl champions onto the field to a loud cheer from the fans that have refused to believe he was involved in the scheme to illegally deflate the footballs used in the AFC championship game.

Brady's No. 12 jersey was visible throughout the crowd, mixed in with the "Free Brady" shirts being sold across the street from Gillette Stadium. One tent along Route 1 seemed dedicated entirely to Brady fans who wanted to show their displeasure with the league.

The three-time Super Bowl MVP was not available for comment after the game, nor has he been made available by the Patriots all preseason.

Garoppolo's struggles weren't really his fault — he was sacked seven times, and the interception bounced off Josh Boyce's shoulder before LaDarius Gunter grabbed it and ran it back 28 yards to the New England 29.

But neither was his biggest success.

The Patriots' only touchdown was scored when Jonas Gray bounced to the right side and went 55 yards to the end zone, virtually untouched.

The game was the first for the Packers with associate coach Tom Clements calling the offensive plays instead of head coach Mike McCarthy, now in his 10th season. With 406 yards of offence and no turnovers, McCarthy said the new system's debut was OK.

"Communication was good, the whole network was good," McCarthy said. "Offence, defence, special teams, everything that had to flow did."

Patriots defensive lineman Trey Flowers, a fourth-round draft pick from Arkansas, sacked Rodgers in the first quarter. But he left a short time later with an apparent injury. The Patriots said they did not have any information on the injury.

The Patriots went 0-for-2 on fourth down with one near miss. Garoppolo ran up the middle on fourth-and-4 early in the fourth quarter and the officials initially gave New England the first down. The replay review gave the ball to the Packers.

Green Bay was successful twice on five fourth-down conversion attempts. McCarthy said he hasn't adopted a radical philosophy to go for it on fourth down.

"You take advantage when you have the opportunity to work them against a team like the Patriots," he said. "I don't think I'll be going for it (five) times in the regular season."