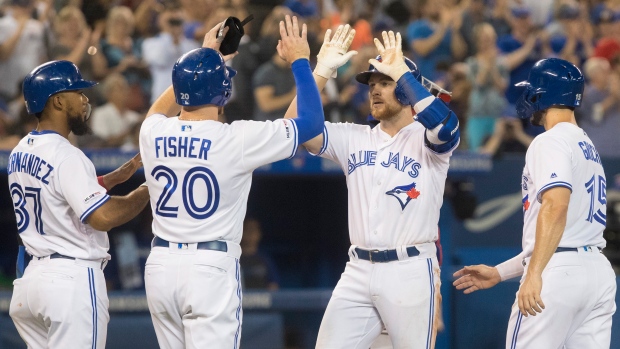 TORONTO — As soon as Brandon Drury's bat connected with the ball he knew he'd hit the first grand slam of his career.

Drury's moon shot to deep left field scored half of the runs in an eight-run fourth inning that helped the Blue Jays cruise past the visiting Texas Rangers 19-4 on Monday night. It was Drury's second at-bat of the inning as Toronto worked through its entire lineup.

"Any time you've got the bases loaded you always have a grand slam in the back of your head," said Drury. "When I hit it I knew I got it. I was excited about it and I felt like it put the game away."

At 26 years old and in his fourth Major League Baseball season Drury is considered a veteran on a Blue Jays team in the midst of a rebuild. One player he's connected with is rookie sensation Bo Bichette.

"Me and Bo actually talk hitting all the time," said Drury. "Just about our approaches and what we're trying to do that day, the pitcher's stuff. We're both guys that try to use the middle of the field, so I think we can relate to approach and try to attack the pitcher that day with the same game plan."

Bichette stayed hot on Monday, improving his batting average to .394 with four hits, three runs, and a stolen base.

When manager Charlie Montoyo came out to address media after the game he joked that Bichette had broken another record but he wasn't sure what it was yet.

Montoyo was right — Bichette's two doubles against the Rangers brought his total of extra-base hits to 15, the first player in MLB history to reach that mark in the first 15 games of their career.

"I think it really has to do with trust. Going out there, not trying to do too much and just trying to focus on what makes you good," said Bichette.

Veteran slugger Justin Smoak was more succinct: "He just falls out of bed and gets a hit."

Smoak, Randal Grichuk and Danny Jansen also hit home runs as Toronto's (50-72) offence churned out 21 hits, including a franchise record 13 extra-base hits. The Blue Jays' 19 runs were the third most in team history.

Smoak and Grichuk both went 3 for 5 with had four RBIs apiece. Their back-to-back home runs in the third inning were the 10th time Toronto has had consecutive homers in a game this season.

"I've been telling you guys since April, but it just hasn't happened," said Montoyo about the Blue Jays offence. "Now it's been happening. The better at bats, the more pitches the pitchers have to throw, that's why I call hitting contagious, because pitchers have to work harder and harder."

Neil Ramirez threw a strike on every one of his seven pitches as the one-inning starter for Toronto. He gave way to Brock Stewart, who earned his second win of the season after pitching 5 1/3 innings, giving up three runs on five hits. Buddy Boshers and Justin Shafer each pitched an inning and a third, with Shafer allowing a run in the ninth inning.

Nomar Mazara, Willie Calhoun and Rougned Odor each had a solo homer for the Rangers (59-59). Odor was booed during each one of his at bats with Blue Jays fans not forgiving him for punching former Toronto slugger Jose Bautista in the jaw to spark a benches-clearing brawl in 2016.

A two-out single by Jose Trevino in the ninth inning plated Mazara for the game's final score.