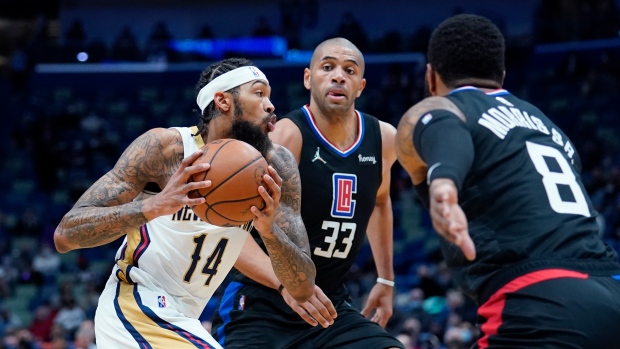 “B.I. is playing at an extremely high level; he can pick and choose his spots,” Pelicans coach Willie Green said. "The beauty in what he’s doing is that he’s trusting in his teammates, and when you do that, the sky’s the limit of what you can do offensively.

“That’s want we want from all of our guys — keep trusting each other,” Green added, complimenting his team's 23 assists. “It’s hard to guard when everybody’s involved.”

Jonas Valanciunas had 18 points and 16 rebounds for the Pelicans. They never trailed and led by 28 points en route to their third victory in four games.

Terance Mann scored 15 points and Marcus Morris had 12 for the Clippers. They overcame a 25-point deficit at home against Denver on Tuesday night, but could not come close to pulling off a similar comeback in New Orleans.

“We are just trying to figure it out," Mann said, referring to the absence of star forward Paul George, who has a right elbow injury and missed his 11th straight game. “They got out to an early lead that kind of put us in a hole. Once a team is feeling confident like that, it’s kind of hard to come back from that.”

Rookie Herb Jones scored 14 points and had three steals for the Pelicans, who parlayed 15 Clippers turnovers into 23 points. New Orleans, meanwhile, committed just six turnovers, well below its average of 14.9 coming in.

“We came out super aggressive defensively," Jones said. "Hopefully, we can stay consistent and keep getting wins.”

New Orleans led throughout the first half and by as many as 23 points when Jaxson Hayes threw down an alley-oop feed from Ingram to make it 49-26 in the second quarter.

“They looked pretty old tonight, and we just did not have a lot of pop,” Lue said. “We did not make our shots and the game kind of got away from us.”

Looking active defensively and boxing out for rebounds, the Pelicans put together a stifling defensive effort in the opening half as well, holding the Clippers to 26.2% (11 of 42) shooting. Los Angeles also was a dismal 2 of 18 from 3-point range in the first half.

In the last two minutes of the second quarter, Valanciunas dunked to give him a first-half double-double with 11 points and 10 rebounds. Ingram followed soon after with a turnaround in the lane to put the Pelicans up 53-32.

Clippers: Missed 24 of 34 3-point attempts, with Morris missing eight of nine. ... Brandon Boston Jr., Serge Ibaka and Xavier Moon each scored 10 points. ... Reggie Jackson scored just five points, nearly 12 below his average, on 2-of-11 shooting, including 1 of 6 from deep.

Pelicans: Hayes finished with 13 points and has two straight games with at least that many. ... Josh Hart scored 12 points. ... Improved to 10-5 with a starting lineup of Jones, Ingram, Valanciunas, Josh Hart and Devonte’ Graham. ... Have beaten the Clippers five straight times.

Pelicans: At Brooklyn on Saturday night.