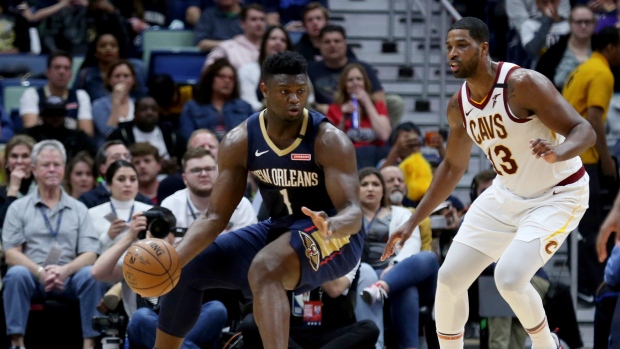 NEW ORLEANS — Lonzo Ball launched a long two-handed chest pass from one foul line to the other, where Zion Williamson caught it in stride above his head, took a step and dunked with two hands.

That play, less than three minutes into Friday night's contest against the Cleveland Cavaliers, seemed to symbolize the Pelicans' playoff push being kicked into high gear.

“It was crazy, like right before the game, I looked at Lonzo and said, ‘Lonzo, I’m running, so if you throw it, I'm going to catch it,'" Williamson recalled. “He took that literally, so he just started bombing them.”

Jrue Holiday scored 22 points and Derrick Favours grabbed 15 rebounds for the Pelicans, who held a double-digit lead for most of the game en route to their third victory in four games as they pursue the final playoff spot in the Western Conference.

That's a far cry from when a franchise-record 13-game skid dropped the Pelicans to 6-22 as they endured prolonged absences by Favours and Williamson.

“Things are only going to get better going from here,” said Ball, who finished with a game-high 12 assists. “We just got our team back, so hopefully we can make this playoff push.

“We still have time; that's the great thing,” Ball added. “We kind of control our own destiny right now.”

Collin Sexton tied a career high with 31 points for Cleveland, which came in having won three of four under newly promoted head coach J.B. Bickerstaff. Kevin Porter Jr. scored 16 and Darrius Garland 15 for the Cavs, who led just twice by two or fewer points in the first two minutes before falling behind for good.

The Pelicans were up 93-70 after Ingram's 3 with less than five minutes remaining in the third quarter, but Sexton made three 3s during a 13-2 run that cut New Orleans' lead to 12 by the end of the period.

Williamson, Ingram and Holiday checked back in to start the fourth, and the Pelicans promptly went on a 10-2 run — ignited by 3s by E'Twaun Moore and Holiday — to push their lead back to 20.

“It's fun to see everybody's hard work paying off," Ingram said. “For us to share the ball and get our assist numbers up and find the rhythm of our offence, we're moving in the right direction.”

Aided by Ball's first five assists, the Pelicans raced to a 21-point, first-quarter lead when Josh Hart's transition 3 made it 43-22.

The lead reached 22 in the second quarter when Ingram's finger roll made it 64-42.

“This team is explosive,” Bickerstaff said of the Pelicans. “They got ball-skill players. They got athletes. They’ve got a really talented team and I think they’re going to put a lot of pressure on people down the stretch.”

Cleveland could have fallen farther behind if not for Sexton, whose 19 first-half points on an array of driving layups and jumpers helped trim the Cavaliers' deficit to 13 before Ingram's dunk gave New Orleans a 70-55 lead going into halftime.

Pelicans: Host the Lakers on Sunday night, just six days after LeBron James scored 40 in a 118-109 victory over New Orleans in Los Angeles.