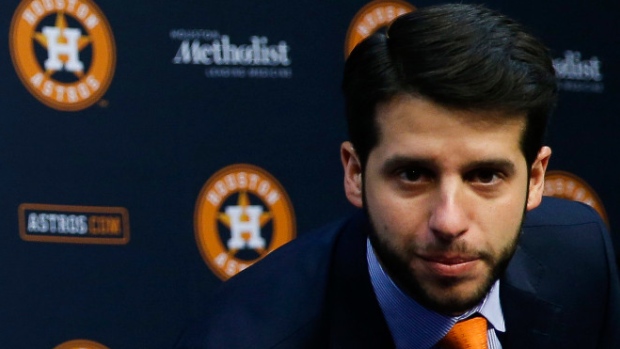 Taubman had been placed on the MLB ineligible list in 2020, months after a tirade praising his team's acquisition of pitcher Roberto Osuna, who served a 75-game suspension for violating the league's domestic abuse policy, in front of female reporters during the American League Championship Series.

In the Astros clubhouse, following their clinching of the AL pennant, Taubman yelled “Thank God we got Osuna! I’m so f---ing glad we got Osuna" at a group of female reporters.

Sports Illustrated's Stephanie Apstein was the first to report on the encounter. The Astros refused comment on the story, but called Apstein's reporting a “completely irresponsible” fabrication and claimed that Taubman was simply attempting to support a player after a "difficult outing."

After a Major League Baseball investigation into the matter confirmed Apstein's reporting, the Astros fired Taubman and owner Jim Crane issued an apology to Apstein.

Taubman was officially placed on the ineligible list as part of punishment to the team doled out in the wake of the 2018 sign-stealing scandal.

After the 2020 World Series was Taubman's earliest eligibility to be reinstated and Sherman notes that his case was considered based on a lack of proof of Taubman's participation in the team's sign-stealing operation, as well as his attempt to make amends with Apstein, a donation to a domestic abuse centre and the completion of therapy.

Major League Baseball has not commented on Sherman's report.