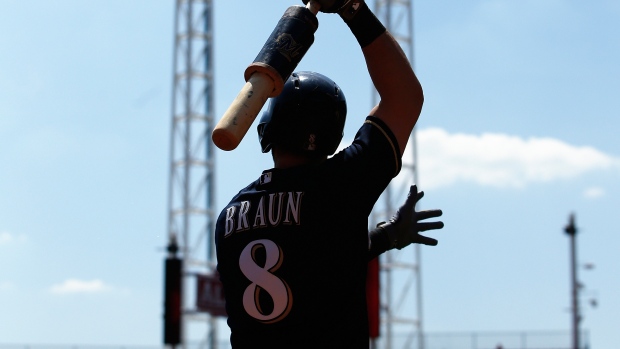 CINCINNATI - The music in the Milwaukee Brewers' clubhouse was cranked so loud that it was hard to hear anything else. And no one minded.

"Don't turn it down!" pitcher Matt Garza said. "I can talk loud!"

With Ryan Braun finally breaking out of his slump, the Brewers hope they've finally put all of their numb, postgame silence in the past.

Braun hit his fourth career grand slam and a solo homer Wednesday, powering the Brewers to an 8-3 victory over the Cincinnati Reds that provided a one-day respite from their awful start.

Milwaukee ended a seven-game losing streak on the road and improved to 5-17 overall, the worst start by a National League team since the 1997 Cubs went 4-18.

"Obviously, the wins have been few and far-between," Braun said. "We've been playing terribly in all facets of the game. We'll take every one we can get.

"Individually it's nice to have a good game. It's nice to see some results. I've felt good every day, it just hasn't been there. Hopefully this is something that can get me going, get us going, and get us back on the right track."

All but one of the 11 combined runs came off homers. The NL Central rivals combined for 12 homers in the final two games, 10 of them solos.

Braun, Adam Lind and Khris Davis had solo shots off Michael Lorenzen (0-1), a 23-year-old making his major league debut. The Reds called him up from Triple-A to fill in for Homer Bailey, who is out indefinitely with a damaged ligament in his pitching elbow.

Braun connected with the bases loaded in the eighth off Jumbo Diaz, his third homer in the last two games. The right fielder had only one homer heading into the series, and had gotten two days off from the starting lineup to rest and heal some minor ailments.

"I think if anybody comes through and starts bashing the ball around and driving in runs, it's going to pick up the team," manager Ron Roenicke said.

Garza (2-3) allowed five hits in 6 2-3 innings, including solo shots by Todd Frazier and Tucker Barnhart. Garza has been tough on Cincinnati the last two seasons, going 3-0 in four starts with a 1.26 ERA.

Lind's homer extended his hitting streak to eight games, the longest by a Brewer this season. He has three homers during that span. Davis homered one out later in the second inning.

The Brewers loaded the bases in the eighth against Diaz, who hit Logan Schafer to drive in a run. Braun followed with his first grand slam since June 14, 2010, against the Angels, making it 8-2.

Jay Bruce hit his second homer of the series in the ninth inning.

Milwaukee's four homers were a season high. Lind's homer was the 150th of his career. Braun's grand slam gave him 21 multihomer games in his career.

Reds first baseman Joey Votto was out of the starting lineup, getting some rest. He pinch hit and struck out, leaving him in a 2-for-20 slump.

Brewers: Center fielder Carlos Gomez is expected back from the 15-day disabled list over the weekend. He's been sidelined by a strained right hamstring. He's eligible to return after Thursday.

Reds: Left-handed reliever Manny Parra went on the 15-day disabled list with a strained neck. Bailey was transferred to the 60-day DL with the injured elbow.

Brewers: Milwaukee is off Thursday before opening a three-game series at Wrigley Field. Wily Peralta (0-3) tries for his first win at Wrigley, where he's 0-2 in three career starts. The Cubs go with Jon Lester (0-2).