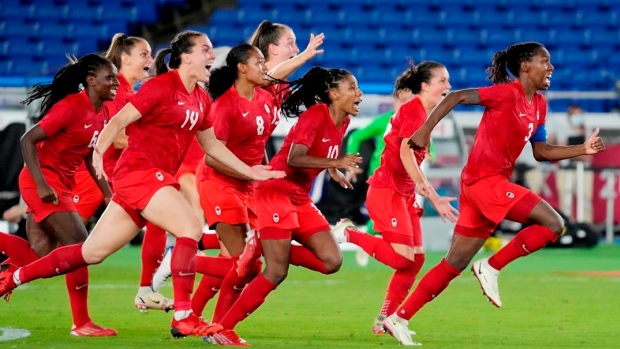 On Friday morning, we witnessed the greatest moment in the history of Canadian soccer.

The Canadian women’s soccer team defeated Sweden in a dramatic penalty shootout at the 2020 Tokyo Games to earn the program’s first-ever Olympic gold.

It’s impossible to overstate what a massive moment this is for Canadian soccer, and how it represents a shift in the landscape of women’s soccer. Canada, ranked eighth in the world, won its first title at a major tournament and stood on top of the podium – not Sweden, not the top-ranked Americans, not the Netherlands or Brazil.

Sweden jumped out to a 1-0 lead on a tally by their top goal scorer, Stina Blackstenius. It was an uncomfortable moment of déjà vu for the Canadians. In the 2019 FIFA Women’s World Cup, Blackstenius scored the lone tally that eliminated Canada in the round of 16.

There were more eerie parallels. Canada earned a penalty in the 69th minute of the match in 2019 that would have tied the game, but Janine Beckie saw her shot stopped by Hedvig Lindahl.

Fast forward to Friday. After an intervention by VAR, Canada was awarded a penalty in the 67th minute. This time it was Jessie Fleming stepping up to the spot, just as she did against the Americans in the semifinal. And once again, the 23-year-old midfielder coolly converted to bring the game level.

From there, it came down to more gritty defence that has been a staple of Canada’s performance this tournament, as well as a bit of luck.

Sweden missed its chances. There was a wild scramble in the Canadian box in the 89th minute, and it’s still not clear how Sweden didn’t bury. Lina Hurtig had a few headers glance just wide. Another mad scramble occurred in the 118th minute that Canada was somehow able to clear. Canadian players literally threw their bodies on the line.

So it was off to penalties, and, for a moment, it looked like Canada might be destined for silver.

Fleming went first and was clutch once again. But the same players that found success in penalties against Brazil were suddenly thwarted – first Ashley Lawrence, then Vanessa Gilles, then Adriana Leon.

Sweden was one kick away from claiming gold, and the story was written for them. Captain Caroline Seger, the most-capped woman in European women’s football, was stepping up to the spot. Much like Canada’s Christine Sinclair, she was also looking to win her first major tournament.

Her shot sailed over the net. She looked skyward, and Sweden’s moment was over.

Deanne Rose, who scored as a 17-year-old in the bronze-medal match in Rio 2016, converted from the spot next for Canada to tie it. Penalties moved on to sudden death, and it was goalkeeper Stephanie Labbé’s time to shine.

Having already stopped Anna Anvegard, Labbé squared off with Jonna Andersson. The goalkeeper stood at the top of the six-yard-box, staring down the Swede before retreating to her line. The mind games seemingly worked, as Labbé was able to make the diving stop to her left.

The stage was now set for Canada and 20-year-old midfielder Julia Grosso. With the country watching, the native of Vancouver took a breath, and her left-footed strike found the back of the net, despite Lindahl getting a hand to it.

The players erupted in pure joy.

Canada was never considered a favourite in the entire tournament – not to win its group, not against Brazil, not against the United States, and not against Sweden.

But there they stood – Olympic champions.

Since head coach Bev Priestman took over the role last fall, her mantra for the team has been simple: “Be brave.”

This was a tournament where the Canadian players showed no fear, and neither did their coach.

Priestman made difficult decisions all year. She initially listed long-time veteran Sophie Schmidt as an alternate, naming Grosso in her stead (the IOC later expanded the rosters so that all alternates became officially members of the team).

At halftime on Friday, she subbed out Beckie, one of the country’s top scorers, to try to inject some life into the team’s offence.

Now Priestman – the youngest coach in women’s soccer in Tokyo, and the only female coach to reach the semifinals – has led this team to unprecedented heights, and her bravery extended to the players.

Fleming, a native of London, Ont., stood at the penalty spot four times in the knockout round. She converted every single time.

Gilles, with under 10 caps to her name, started the quarter-final against Brazil. She cemented herself in the Canadian backline with her performance, earning her nickname of “The Magnet” with her constant clearances, and scored the winning penalty to top it off.

Quinn, with the bravest decision of all, came out publicly as transgender last year. They became an icon in the transgender community, and now, they are the first openly trans person to earn an Olympic medal.

The stage was never too big for this team, but the ripples of this win extend past the current 22 players.

It’s for all the players who came before that made this moment possible. It’s for Diana Matheson, Kara Lang, Melissa Tancredi, Rhian Wilkinson – the list goes on.

It’s for the players who finished fourth at the 2003 FIFA Women’s World Cup when few were watching. It’s for the ones who gutted out a bronze medal in 2012 when no one thought it was possible.

And of course, it’s for the icon herself. Sinclair, who has the most international goals of all-time with 187, who won the Lou Marsh Award as Canada's top athlete in 2012, and who has accomplished just about everything there is to achieve in soccer. She finally has what she had craved most: a major international title.

Unlike years past, this team never revolved around Sinclair. She is still a starter, still the captain, and still an incredible contributor, but the team has evolved past the point of needing her to succeed.

When she was subbed out in the 86th minute, there was never an “oh no” moment. She believed in her teammates, as they have believed in her for more than two decades. In her unassuming manner, she gave the captain’s armband to Desiree Scott, hugged her long-time teammate, and gave words of encourage to her replacement, Jordyn Huitema.

No one but Sinclair knows when she’ll retire. But if this is the end, there is no better finale for the 38-year-old from Burnaby, B.C.

A new era for Canada

Canada has now entered the conversation as legitimate contenders in women’s soccer. Entering the tournament, few, if any, pundits outside of Canada gave the team any kind of chance to medal, let alone reach the top of the podium.

But this tight-knit Canadian team always had the internal belief, and there was no better example of that than its upset victory over the Americans in the semifinal, Canada's first win over its rivals in 20 years.

Now the question becomes: “What’s next?”

The 2023 FIFA Women’s World Cup in Australia and New Zealand is fast approaching, thanks to the year-long postponement of the Tokyo Games. Canada has not been able to translate its Olympic success to the World Cup in the past four tournaments, having failed to reach the semifinals since 2003.

But the push to form a domestic women’s league in Canada will likely now be intensified. Canada is the only top-10 women’s team in the world not to have one.

In order to play professionally currently, Canadian players must go south to the U.S-based National Women’s Soccer League, or travel overseas to play in European circuits, such as the Women’s Super League in England.

And these opportunities are only for the top echelon of Canadian players. Countless more are forced to give up on soccer after college because they don’t have anywhere to play.

In many ways, the Canadians' success comes despite the hurdles its own federation has put before them. In order for the program to continue the momentum this Olympic gold has started, more investment is needed.

But these questions can wait, at least for one more day. For now, all of Canada is united in gold.