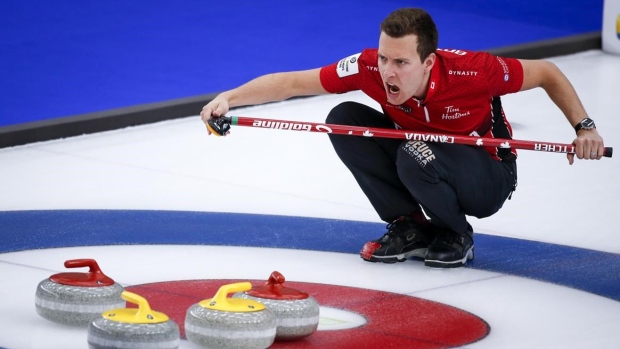 LACOMBE, Alta. — Canada has to win a berth in the 2022 world men's curling championship because of a challenge from Brazil and Mexico.

Reigning Canadian champion Brendan Bottcher from Edmonton will face the Brazilians and Mexicans in an Americas Zone Challenge at the Lacombe Curling Club on Oct. 29-31.

The Americas Zone has two berths in the men's world championship. The U.S. is guaranteed a spot as the hot country.

Canada can be challenged by other countries in the zone, but that happened just once before in 2018 when the world championship was also in Las Vegas.

Brazil challenged Canada and Glenn Howard swept a best-of-five series 15-1, 8-3 and 6-3 to lock in Canada's berth.

Brad Gushue won the Canadian title that year and went on to finish second in Las Vegas.

Bottcher, third Darren Moulding, second Brad Thiessen, lead Karrick Martin will take on Brazil and Mexico in a double round-robin with no playoffs.

"Obviously, this is an important event for Canada, and we take that opportunity to wear the Maple Leaf very seriously, so we are already preparing for this event," Bottcher said Wednesday in a statement.

“We have nothing but respect for any team that steps onto the ice to represent their country, and I know Mexico and Brazil will be bringing their best to Lacombe, so we will have to be ready."

Canada has won a world-leading 36 gold medals at the men's world championship since its inception in 1959.

Brazil and Mexico are trying to gain entry for the first time.

This report by The Canadian Press was first published Oct. 6, 2021