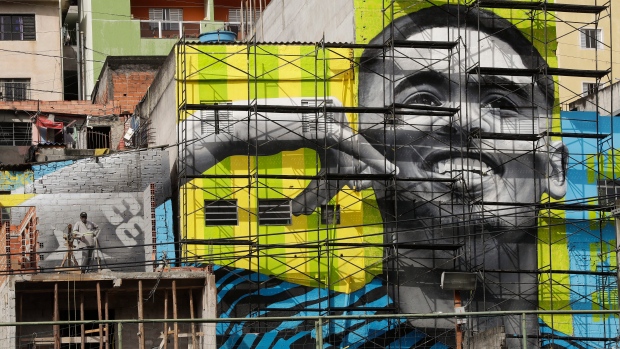 SAO PAULO — Four years ago teenager Gabriel Jesus was painting the streets of Jardim Peri, a favela on the northern edge of Sao Paulo where crime is rife and fetid creeks flow past children playing football.

Now, as he battles to become Brazil's number 9 at football's main event, having just turned 21, it is the favela that paints him on its walls to thank the striker for the inspiration he provides.

More than a dozen houses of the region were painted with a depiction of the Manchester City and Brazil striker celebrating a goal, as if he were calling for his mother Vera Lucia. The 112-feet-tall mural in green, yellow and blue was visited by the striker himself on a quiet visit.

"I hope one day it is a painting of me up there," said Filipe Araujo, 11, one of the local talents playing at the local Jardim Peri pitch that takes inspiration in the striker's rag to riches story. "Gabriel never forgot us, he makes us proud and deserves this."

Jesus, who lived a few meters away in a modest house on Capitao Ulisses Soares de Campo street until age 16, discreetly visited the site of the painting. Tetinha, as he is known in the region, told friends that he was moved by the tribute, which was paid for by one of his sponsors.

Jardim Peri plays such a big part of Brazil's number 9's life that he tattooed the favela on his right arm. Pictures of the region are in all his social media channels. Friends and family still live there. "I left Peri, but Peri has never left me," he often says in interviews to Brazilian media.

Few players in the World Cup in Russia have lived changes as dramatic as Jesus from one tournament to the other.

When Brazil hosted the last World Cup the future number 9 could barely afford bus fares to go to training sessions at a northern Sao Paulo club. That meant he had to walk in flip-flops for almost two miles so he could attend practice. Whenever he had some change, friend Gisele Xavier remembers, he spent it at her bar buying candy.

"He has always had a childish taste for food, he loves soft drinks and cookies," Xavier said in her bar, with several shirts donated by Jesus on her wall. "I never saw him drinking beer, even when he was here watching World Cup games four years ago."

Luis Diniz, one of the uncles of the striker, has lived in Jardim Peri for 30 years, and misses his nephew running around and celebrating goals as if he was Carlos Tevez, a Corinthians player between 2005 and 2006. A decade later Jesus would hit the limelight playing for their archrivals Palmeiras.

"Gabriel was always a great kid, he liked to study and to play. Now children here take inspiration from him. He is a reason of pride for the neighbourhood and for our family," Diniz said.

Jesus is likely to become Brazil's youngest striker to start a World Cup match in 60 years. When Brazil coach Tite took over in 2016 amid turbulence in the South American World Cup qualifiers, the Palmeiras starlet was fighting for the position with Gabriel Barbosa, who moved back home this year after a goal drought with Inter Milan in Italy and later in Portugal with Benfica.

But Jesus' two goals at Ecuador helped Brazil to a 3-0 victory in Tite's debut. He never lost the position, even after Liverpool's Roberto Firmino stepped up his game.

To make England more comfortable, Jesus took Higor and Fabio, two of his Jardim Peri boyhood friends, and cousin Alan to live with him.

"Gabriel comes here every vacation, everyone wants him here," Alan said. "If Tetinha becomes a world champion in such a short time they will paint his face all over the neighbourhood."