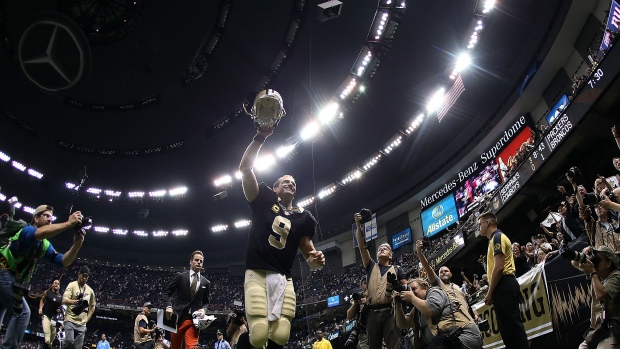 NEW ORLEANS - Drew Brees has heard his critics getting louder this season.

The talk might be about the 36-year-old quarterback's advancing age. Or his ability to bounce back from a Week 2 throwing-shoulder injury. Or his $20 million annual salary causing the Saints undue salary-cap pressure.

Yet Brees contends he can play as well as ever, and on Sunday against the New York Giants, he sure did.

Brees passed for career highs of 511 yards and an NFL record-tying seven touchdowns, and recently signed Kai Forbath kicked a 50-yard field goal as time ran out, giving the Saints a 52-49 victory in a game with a record 13 scoring passes.

"It's not like we came out today with the intent to set a few records just to shut some people up," said Brees, who went 40 for 50. "Our mindset is, every time we step on the field, we have a chance to do something pretty special."

The 101 points tied for third most in an NFL game. Both offences combined for 1,030 yards.

"Never been a part of something like that," Brees said. "Pretty wild."

"Their offence is always high-powered. I thought it might be a day where we were going to have to score some points," Manning said. "I didn't know how many it would take. Obviously, the offence did some good things."

Manning had lost his previous two visits to the Superdome, where his father, Archie, starred for the Saints. But those games were in 2009, when the Saints became Super Bowl champions, and 2011, when New Orleans was setting numerous offensive records in a 13-win season.

The 2015 Saints (4-4) are younger and a little raw, but seem to be hitting their stride, having won four of five after an 0-3 start that ignited all kinds of predictions about the demise of the Sean Payton-Brees era.

Brandin Cooks and Willie Snead each had two touchdown catches. Brees' other three scoring passes went to Marques Colston, Ben Watson and C.J. Spiller, the last to tie the score at 49 with 36 seconds left.

Only seven other players threw seven TD passes in a game, including Peyton Manning and Nick Foles in 2013. Sid Luckman, Adrian Burk, George Blanda, Y.A. Tittle and Joe Kapp also did it between 1943-69.

The Saints then forced the Giants (4-4) to punt from their 25 with 20 seconds to go. Marcus Murphy returned Brad Wing's punt 24 yards across the 50 and fumbled, but Snead recovered. Wing may have been better served punting the ball out of bounds. Instead, he tried to make a tackle, but was flagged for a facemask.

That penalty set up the winning kick on Forbath's first field goal attempt with New Orleans, which signed him before last week's victory at Indianapolis. It was the fifth winning field goal for the former Washington Redskins kicker and tied his career long.

"I've been fortunate to get in situations where it's come down to a kick," Forbath said. "I really work on, in practice, trying to make everything the same every single time."

Forbath got the game ball, though he said Brees deserved it. Brees said he was fine with Forbath getting the honour, adding that he told the kicker, "Don't get cocky. There'll be more."

The Saints pulled out the victory after the Giants stormed back from a 42-28 hole.

Manning started the comeback with a 9-yard TD to Dwayne Harris on a difficult throw to his left as he was rolling right on fourth-and-5. Manning later hit Harris from 20 yards to tie it at 42.

The Saints responded by driving across the 50, but Snead fumbled on a vicious hit by Dominique Rodgers-Cromartie, who had intercepted Brees earlier in the game. The ball bounced into the arms of Trumaine McBride, who sprinted 63 yards for a go-ahead touchdown.

Beckham's first two touchdowns came from short-range throws in the first half. In the third quarter, Beckham got behind Delvin Breaux and Jairus Byrd for a 50-yard catch, tying it at 28.

Brees' longest pass went for 53 yards on Colston's touchdown, a play on which the Giants appeared confused over who should cover New Orleans' all-time leading receiver on a no-frills route down the middle. Colston had eight catches for 114 yards. Watson caught nine passes for 147 yards.

The Superdome remained a house of horrors for Giants defensive co-ordinator Steve Spagnuolo, who in 2012 oversaw a Saints defence that gave up an NFL-record 7,042 yards. The Giants entered the game ranked 29th, giving up 401.7 yards per game. The Saints finished with 614 offensive yards.

New Orleans' defence, coached by Spagnuolo's replacement, Rob Ryan, came in ranked 30th and gave up 416 yards, above its average of 404.9.

NOTES Saints running back Khiry Robinson was carted off the field with his lower right leg in an air compression sleeve in the first half. The Saints did not immediately provide an update on his diagnosis. ... Giants tight end Larry Donnell left the game with what Coughlin said were neck spasms.