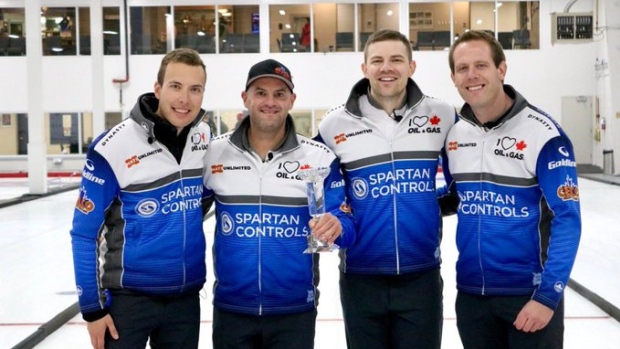 Koe scored two in the seventh end to take a one point lead before the 28-year-old recorded a deuce of his own in the eighth and final end to prevail with the title.

This was just the second event of the season for Bottcher, third Darren Moulding, second Bradly Thiessen and lead Karrick Martin after the foursome lost their third consecutive Brier final last March in Kingston, Ont.

This was the second straight final appearance for the new-look Koe foursome with two-time Olympic gold-medalist John Morris at second.

In mid-October, Koe defeated Bottcher in the semifinals of the ATB Banff Classic before losing to Jeremy Harty.

Further west in Kelowna, B.C., Corryn Brown and her Kamloops foursome beat Mary-Anne Arsenault, also from Kelowna, in the final of the Raymond James Kelowna Double Cash. The final got real interesting in the last three ends, starting with Arsenault taking four in the sixth to take a 7-6 lead. Brown took the lead back by scoring a pair in the seventh before stealing another two in the last end for the 10-7 victory.

Champions in Kelowna! 🏆 Felt great to be back on the ice competing again. Big thanks to Jeff Richard and the Kelowna Curling Club for organizing and making sure we were able to compete safely. #curling #TeamBrown 🥌 pic.twitter.com/EQ8EO7549h

The 25-year-old Brown represented British Columbia at the Scotties Tournament of Hearts for the first time in her career last season in Moose Jaw, Sask. Brown led her young rink of third Erin Pincott, second Dezaray Hawes and lead Ashley Klymchuk to a 5-6 finish and an appearance in the championship pool. Samantha Fisher replaced Klymchuk at front end for the 2020-21 campaign.

Arsenault was at that Scotties as well, representing Nova Scotia for an incredible 14th time. After five Canadian championships and two world titles, the 52-year-old moved to the other coast this summer and is now playing in B.C.

In the men's final, three-time Canadian junior champ Tyler Tardi of Langley, B.C., picked up an impressive victory by scoring three in the last end to edge past Sean Geall of New Westminster, 7-6. Tardi, Sterling Middleton, Jason Ginter and Jordan Tardi lost their first game of the week before reeling off five straight en route to the championship.

Winner winner krill filled dinner! Thanks to all our supports to help us win the Kelowna cash! #krilledit pic.twitter.com/TU8vLugUU2

Here are some other results from this weekend.