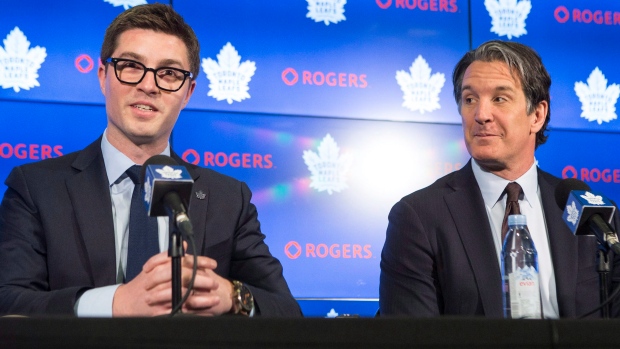 When the NHL officially unveiled its plan for a potential return amid the global COVID-19 pandemic on Tuesday, the Maple Leafs were very much in the picture as part of a prospective 24-team field.

Toronto is also in the running to be one of two hub cities for the tournament, but Maple Leafs president and alternate governor Brendan Shanahan cautioned there is a long way to go before hockey’s return – in Toronto or elsewhere – will be feasible from a health and safety standpoint.

“None of us ever want to be perceived, and none of us would agree to a situation, where we are taking away [COVID-19] testing from people that need it,” Shanahan said on a conference call with reporters Wednesday. “We obviously submitted ourselves [as a hub city], but we would have to really be in a position – and we're talking several, several weeks from now – where the health care community, and the government community of whatever country we're in, whatever city we're in, are in agreement that this can be done and it can be done in a respectful, conscientious way.”

The NHL revealed in a 29-page document on Tuesday that the 2019-20 regular season will be abandoned in favour of a 24-team postseason format, beginning with a round of five-game play-in series.

For the Leafs, that would mean a matchup against the Columbus Blue Jackets to try and earn their way into the final 16-team playoff field.

In preparation to possibly move ahead, the league laid out parameters of Phase 2 and Phase 3 for its potential restart, including the amount of testing it would like to do if protocols move ahead.

In a potential Phase 2, where players participate in voluntary small group workouts in their home facilities by early June, testing would be administered at least twice per week. By the prospective Phase 3, where games would begin in late July or early August, testing would happen every day.

Toronto is one of 10 hub cities currently under consideration by the league to host teams in Phase 3. By that point, it’s the hope of Leafs captain and NHLPA Return To Play Committee member John Tavares that there will be more clarity on the evolution of COVID-19.

“We just want to feel that we're in a safe environment and we're getting the best advice that we possibly can from the experts,” he said. “We’re talking to a lot of the infectious disease experts and following their guidance and understanding what is necessary to be put in the best possible position to have the absolute lowest risk – whether that's testing every day, or not needing it that often. I think we believe and we know that our communities are going to be in a lot better place [to allow us to] play hockey and be able to play competitively [if a return happens].”

If they do go back to work, Tavares said players ideally want to be somewhere that doesn’t restrict their day-to-day lives too much.

"When you're in that [place] for an extended period of time, you want to feel comfortable as a person,” Tavares said. “And I think the mental health side of it [is important] to make sure that we feel we're not just in our hotel rooms and going to the rink, but that there's going to be really good structure in place where we can feel like ourselves and be like ourselves.”

The final location of the hub cities won’t be revealed by the NHL for three to four weeks, but Shanahan is already stressing that despite the United States declaring NHLers essential workers who can bypass the current border restrictions and quarantining requirements when entering from Canada, the Leafs aren't lobbying the Canadian government for any special treatment for players.

“We don't make that argument,” Shanahan said. “Those are questions that the National Hockey League is having with the Government of Canada, and I don't think it's so much looking for exceptions. It's just trying to see where the government is, where the country is, where the communities and provinces are, and how this may evolve over time. We understand and know that hockey is part of the fabric of Canada, but any return to play would have to be done in concert and in partnership with the health care professionals of Canada and with the government.”

To that end, Leafs players who want to be part of a possible Phase 2 next month have begun the journey back to Toronto, where they will abide by Canada's 14-day quarantine law.

“We have had quite a few players, if not most of them, beginning to book their travel back,” said Leafs’ general manager Kyle Dubas. “I wouldn’t say we encouraged that because it is a voluntary phase for the players. But it seems that most of our guys would like to be here and at least be into their small groups with others, which [we expect] will begin at some point here in the next week or two weeks.”

One player already settled back in town to await word on Phase 2 is prospect Nick Robertson. The 18-year-old forward was drafted in the second round, 53rd overall, by Toronto in 2019 and is coming off a sensational 55-goal season with the OHL’s Peterborough Petes, where his average of 1.2 goals per game was seventh-best all-time in the league.

With the NHL stipulating teams can carry up to 28 skaters on their roster for a potential return to play, Dubas didn’t hesitate to make sure Robertson would be in the mix.

“Nick had a great season in Peterborough and continued to improve what he could offer,” Dubas said. “I know what he's been doing since he's been back home in Los Angeles and I know his commitment to being in the best possible shape that he can be. That, combined with his talent and ability, makes me believe that he'll give a good run for not only just being here, but to potentially be on the roster.”

Dubas said seven or eight players from the AHL’s Marlies are also in the team’s plans for Phase 3, and could return to participate in Phase 2 as well. But regardless of where players are physically leading up to a possible restart, Dubas’ message has been clear about the task Toronto would face in a potential play-in series with Columbus.

“The discussions I’ve had with [head coach] Sheldon [Keefe] and our players is that our focus can’t be on opponents or potential opponents, it has to be on ourselves and arming the players during the voluntary phase with the resources they may need to get themselves into the best shape possible,” Dubas said. “I think the conditioning of our athletes will be a major competitive factor as we get rolling, not only that they’re in the best shape they can possibly be in in every regard, but that we’re also guarding against potential injury.”

While the Leafs are now guaranteed at least one series if the NHL can resume, there’s also a chance they have a high draft pick, based on the league’s newly revealed draft lottery plans.

After Phase 1 of the lottery takes place June 26 for the seven teams already eliminated from contention (who have identical lottery odds they would under normal circumstances based on points percentage), the eight teams that don’t advance from the play-in round will have equal 12.5 per cent odds of securing the first-, second- or third-overall pick in the draft.

The Leafs traded away their 2020 first-round pick to Carolina in the Patrick Marleau deal last June, but Toronto’s three per cent chance of still securing that first-overall pick remains intact because Dubas negotiated the pick sent to Carolina would be top-10 protected.

Like everything else at this point, Dubas is taking that possibility in stride, knowing there’s a long way to go before any of these prospective scenarios take real shape.

"It’s so hard to say how it’s all going to run,” he said. “We have a lot of real estate to cover before we get [to playing]. Not to say it would be a horrible scenario to win the lottery or anything like that, but I tend to focus more on the optimistic view, which is getting our team ready to be able to have success. I think we have a lot to prove and to be able to prove that will start with how we operate here in Phase 2 and Phase 3 and set ourselves up. I hope to never have any discussions with anyone about the lottery again.”​