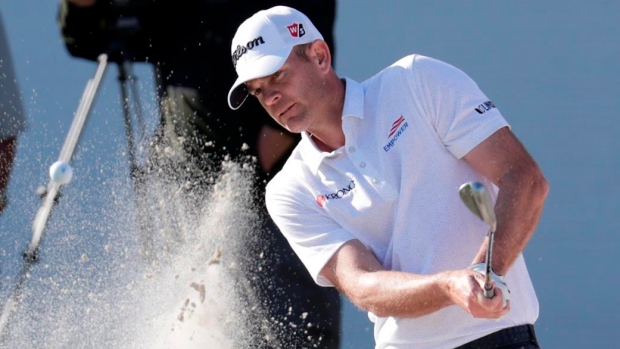 PALM BEACH GARDENS, Fla. — Brendan Steele made a couple of big mistakes down the stretch, and still was more than good enough to grab the outright lead at the midpoint of The Honda Classic.

Steele shot a 3-under 67 on Friday, getting to 5 under for the week and putting himself a shot clear of J.T. Poston (69), Lee Westwood (69) and Luke Donald (66) after the second round at PGA National.

This is Steele’s ninth time playing the Honda and the first time he’s ended any round at PGA National with the lead. He missed the cut last year by 10 shots, but most of what he’s doing so far this year has worked — that is, until he made bogey on two of his last three holes Friday.

“My first few years here I couldn't quite figure it out,” Steele said. “I thought maybe it wasn't a good course for me. ... I don't feel like it's a course you can just jump out your first time and have it nailed. You have to see it in all the different winds and conditions that you have.”

The cut was 3 over, and most of the biggest names in the field aren’t sticking around for the weekend. Among them: Brooks Koepka, Rickie Fowler, Justin Rose and defending champion Keith Mitchell. Koepka shot a 4-over 74 for the second consecutive day and missed the cut by five shots. Fowler (68) missed an eagle putt at the par-5 18th that would have gotten him to the weekend and fell a shot shy, Rose (74) was 6 over and missed by three shots, while Mitchell (72) missed by five shots.

“You can rack up some big numbers pretty quick,” Koepka said.

Steele had a chance to take an even bigger lead into the weekend.

The famed Bear Trap, PGA National’s stretch of holes 15-17, has never been overly kind to Steele — who was 26 over on those three holes in 31 rounds on that triumvirate before Friday. But his tee ball on the par-3 15th went around the back of the hole before lipping out and stopping inches shy of an ace, and he followed that up with another birdie on the par-3 17th.

Thing was, the 16th and 18th got him. A bogey on the par-4 16th was the first miscue, and then his approach sailed over the green at the finishing hole to lead to another dropped shot. Still, the three-time winner on tour — the last of those coming when he went back-to-back at the Safeway Open in 2018 — left more than satisfied.

“I think a course like this always suits me a little bit better,” Steele said. “I feel like I can make birdies on this course maybe more than other guys can, and I don't necessarily feel that way a lot of weeks. ... That gives me some confidence, and I definitely feel like harder is usually better for me.”

Steele missed a chance for a victory in January in Hawaii, falling to Cameron Smith in a playoff after taking a three-stroke lead into the final round.

U.S. Open champion Gary Woodland put himself squarely in the mix with a 67 and thinks there’s a simple reason why tough courses like PGA National appeal to him.

Mackenzie Hughes (72) of Dundas, Ont., was the only Canadian to make the cut, sitting at 3 over for a tie at 59th. David Hearn of Brantford, Ont., Corey Conners of Listowel, Ont., Roger Sloan of Merritt, B.C., and Michael Gligic of Burlington, Ont., all came up short.

Donald got into the mix as well, looking for his first win in the U.S. since 2012 and the first anywhere since 2013.

Donald had the best round of the day at 66, tied with a pair of South Korean players — Byeong Hun An and Sungjae Im.

“It's probably been a little bit of a lean stretch,” Donald said. “But yeah, I feel like I've been making progress in the last four months with my swing and feeling more comfortable on the golf course.”

Zach Johnson briefly got to 5 under, then posted consecutive bogeys — and hit real trouble on the par-4 11th.

His second shot went into the water, ending up in a muddy spot just at the edge of some long grass. Johnson elected to play his third from there, trying to knock the ball skyward toward the green — but only managing to bury it further into the mud. Johnson had to retreat about 125 yards back up the fairway, played another approach and two-putted from 45 feet for a triple-bogey 7.

Just like that, he went from tied for sixth and one shot back to tied for 23rd and four shots off the lead. He finished with a 75, going to 2 over for the week.

DIVOTS: Matt Every birdied his final hole to shoot 15-over 85. He put four balls in the water on the par-3 5th and took an octuple-bogey 11. ... Michael Thompson’s record streak of Honda rounds without a ball in the water on the Bear Trap is over. Thompson put his tee ball on the par-3 15th in the water, his first such mistake in 30 Honda rounds at PGA National. ... Bronson Burgoon withdrew after nine holes citing a neck injury. ... First-round co-leaders Harris English (74) and Tom Lewis (75) both slipped well of the pace, but comfortably made the cut. English was even par, Lewis 1 over.