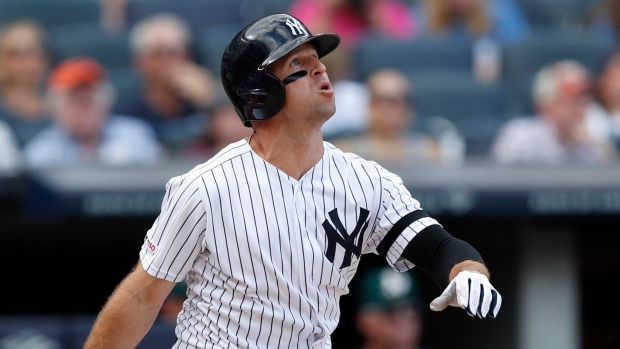 SAN DIEGO — Outfielder Brett Gardner is staying with the New York Yankees after the best offensive season of his career, agreeing to a one-year contract that guarantees $12.5 million, a person familiar with the negotiations told The Associated Press.

The person spoke on condition of anonymity Thursday became the agreement had not be announced.

Gardner gets a $2 million signing bonus and an $8 million salary for next season. The Yankees have a $10 million option for 2021 with a $2.5 million buyout.

He earned $7.5 million last season plus a $2 million buyout after New York declined his $12.5 million option for 2019 under his previous contract. Gardner he hit .251 and set career highs with 28 homers and 74 RBIs, a rare left-handed bat in a Yankees lineup dominated by right-handed hitters.

“The constant that he is means a lot to the organization as well as the production on the field," assistant general manager Mike Fishman said.

Originally slated to be a fourth outfielder, Gardner saw increased playing time because of injuries to others and played centre for much of the season while Aaron Hicks was injured. Hicks had Tommy John surgery after the season and is not expected to return until summer.

Gardner turned 36 in August and is the senior member of the Yankees, having spent his entire 12-year big league career in the Bronx. He has a .260 average, 124 homers and 524 RBIs.

Yankees fans took to Gardner even more last season for his antics that included repeatedly smashing his bat into the dugout roof after called third strikes.

“He is well loved by all his teammates," Fishman said. “”The passion, it's a part of who he is."

Gardner's agreement, added to the pending $324 million, nine-year contract with pitcher Gerrit Cole, raises the Yankees' projected payroll for the luxury tax to about $257 million, $9 million above where the highest surtax starts.

Catcher Austin Romine followed shortstop Didi Gregorius out of the Bronx, agreeing to a $4.15 million, one-year contract with Detroit, a person familiar with that deal told the AP. That person also spoke on condition of anonymity became the agreement had not be announced.

The 31-year-old Romine has backed up Gary Sánchez for the the past four seasons. Praised mostly for his defence and management of the pitching staff, Romine batted .281 with eight home runs and a .748 OPS in 72 games last season.

Barring another move. Kyle Higashioka becomes the backup for the injury-prone Sánchez.

“He's gotten a taste of the big leagues," Fishman said. “He''s shown enough offensively, defensively that we do feel that he is ready to have a more permanent big league role."