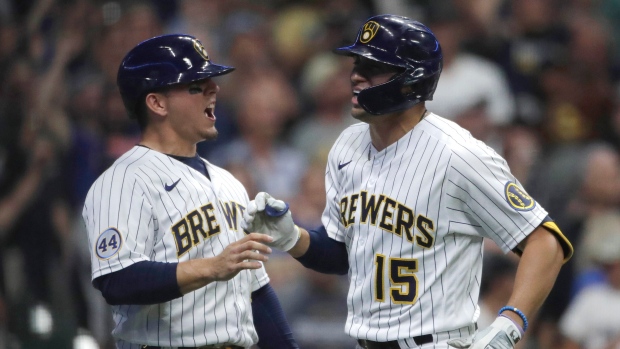 “Before most at-bats, I have to calm myself down a little bit,” Taylor said. “But that one, I definitely had to chill out and stay locked in and regroup and just try to go up there and have a good at-bat.”

La Russa and shortstop Tim Anderson both were ejected by plate umpire John Libka in the opening game of this interleague series between division leaders.

The ejection of La Russa came during a mound conference with two outs in the seventh after Tellez walked on a 3-2 pitch that was ruled just outside. Anderson was in the dugout in the top of the eighth inning when he also got tossed.

This marked the first ejection of the year for La Russa, who retired from managing in 2011 before making a comeback this season.

“I’ve been thrown out a bunch of times in my career, but it’s all because of emotion,” La Russa said. “Sometimes you flare up because you care. I repeat, it’s not our goal to yell at umpires and make them a part of whatever the game is that day. Sometimes, when you care about winning, which we do, you flare up. Umpires understand that emotion is part of it, so they hear with one ear and see with one eye, but sometimes it goes too far, and today it went too far."

“I absolutely do not think he did it intentionally,” La Russa said. “I think he's an RBI guy. But he had a long stride, and it made pitches look like (they were) high when we didn't think they were balls.”

Burr remained in the game after walking Tellez, but he threw a 2-2 pitch that Taylor sent just inside the left-field foul pole to give the Brewers a 7-0 edge.

Taylor said he wasn’t sure initially whether his drive would go foul.

“But then as I saw the ball fly I knew it was going to stay fair,” Taylor said. “It was sick. I was able to celebrate with my teammates. I don’t even know who I made eye contact with in the dugout, but I feel like I made eye contact with every single person and I could feel their energy and I just got hyped with them. I almost missed first base. But we snuck that foot in there, baby.”

Aaron Bummer and Burr each walked two batters in the seventh. The White Sox issued a total of nine walks.

Tellez went 2 for 3 with two RBIs and put the Brewers ahead for good with his bases-loaded single in the fourth off Lucas Giolito (8-7). Tellez, acquired from Toronto on July 6, was 2 of 13 with the Brewers before Friday.

Giolito gave up one run and six hits in six innings while walking five and striking out three.

The White Sox put runners on the corners against Adrian Houser (6-5) in the sixth, but Leury Garcia hit an inning-ending grounder to short.

Andrew Vaughn homered in the eighth for the lone White Sox run.

Brewers starter Freddy Peralta left after throwing just 51 pitches in four shutout innings. The Brewers used both Peralta and Houser on Friday as a way to manage their workload.

Peralta already has thrown a career-high 102 innings this season.

“We got him a break after the All-Star game, a light one, and the goal is just to have this recovery period now between starts just be a little easier, and just get him as fresh as we can,” Brewers manager Craig Counsell said. “We’ll extend him the next time and treat him pretty normal the next time.”

White Sox: La Russa says the reports have been “very encouraging” on OF Eloy Jimenez in his minor league rehabilitation assignment as he prepares to make his 2021 MLB debut after dealing with a ruptured pectoral tendon.

Brewers: OF Lorenzo Cain is expected to continue his rehabilitation assignment with Triple-A Nashville through the weekend and rejoin the Brewers afterward. Cain hasn’t played since May 31 due to a strained right hamstring. ... 3B Travis Shaw (dislocated left shoulder) and 1B Daniel Vogelbach (strained left hamstring) will go to Nashville next week rather than join the Brewers on their road trip as they work back from injuries.