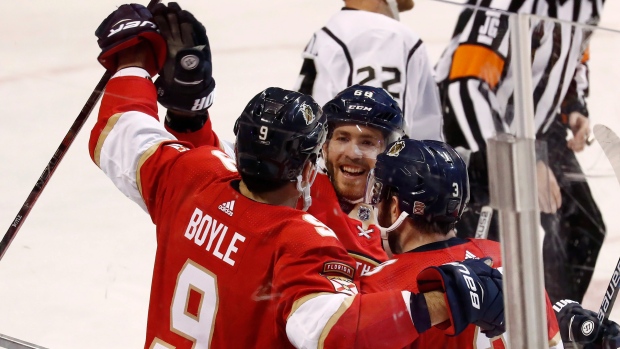 SUNRISE, Fla. — Sam Montembeault came off the bench to help the Florida Panthers hang on for a win.

Brian Boyle scored the eventual winning goal and the Panthers held off a late surge to beat the Los Angeles Kings 4-3 on Thursday night to win their third straight game.

Montembeault was recalled from Springfield of the AHL last Sunday, loaned back on Monday, and then recalled Wednesday.

“I had three flights in three days: Sunday, Monday and Tuesday,” Montembault said. “Obviously, I wasn’t expecting to play in this one, but it turns out we played very well and we had a good win.”

Anze Kopitar had a goal and two assists. Adrian Kempe and Alex Iafallo also scored goals for the Kings. Jack Campbell stopped 22 shots in his third start in four games. The Kings have lost six of their last seven games, including a 4-3 loss at Tampa Bay on Tuesday.

“They swarmed. They held on to pucks in our zone. They made us make mistakes,” Kings coach Todd McLellan said. “We’re professionals. We should be able to show up, but let’s get out of the sunshine, let’s get back to the cold weather.”

Behind 4-0, the Kings scored three goals in the second half of the third period.

Iafallo tipped in a shot by Drew Doughty with 8:18 left to make it 4-1. Kempe’s power-play goal, a shot from the right circle beat Montembeault with 4:52 left and closed the score to 4-2. Kopitar poked in a rebound with 2:40 left and the lead was trimmed to 4-3.

“It’s the desperation part that kicked in in the second half of the third,” Kopitar said. “We’ve got figure out how to bring that to the start of games.”

Leading 2-0, the Panthers stretched the score to 3-0 on Matheson’s power-play goal. Aaron Ekblad passed across to Matheson at the point and he fired the puck past Campbell at 4:55 of the third.

“We needed two points at home. That was the objective; we got it.” Boyle said. “It’s a good lesson to see how quickly it can get away from you.”

Vatrano gave the Panthers a 2-0 lead after Dominic Toninato dropped the puck to Vatrano and his one-timer from above the right circle beat Campbell on the glove side at 3:06 of the second.

The Panthers took a 1-0 lead on Dadonov’s power-play goal. Huberdeau made a centring pass to Dadonov, who one-timed the puck past Campbell at 6:04 of the first.

NOTES: Panthers G Sergei Bobrovsky missed his second game because of an upper-body injury he sustained in practice Saturday. ... Kings C Blake Lizotte missed his fourth straight game and is day-to-day with a lower-body injury… Kopitar leads the Kings with 43 points, scoring 17 goals and recording 26 assists.