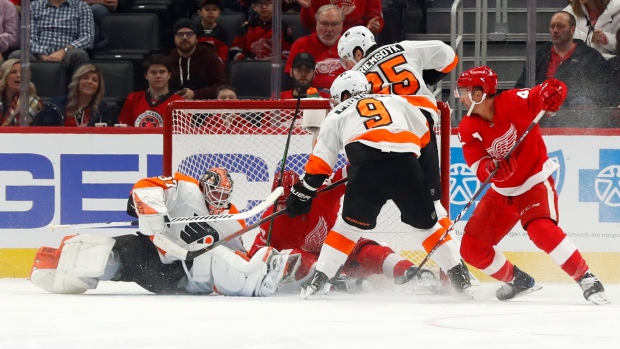 DETROIT — Brian Elliott made 16 saves for his 40th career shutout in the Philadelphia Flyers' 3-0 win over the sinking Detroit Red Wings on Monday night.

It was the Red Wings' ninth consecutive loss (0-8-1), and the second straight time they've been shut out. This is their third losing streak of at least eight games in 2019-20.

“We’ve just got to play the right way,” Justin Abdelkader said. “It’s got to be a game — I don’t want to say a perfect game, because there’s never any perfect games — but we’ve got to make sure we’re not giving teams easy chances.”

Scott Laughton, Kevin Hayes and defenceman Matt Niskanen scored for Philadelphia, which has won four of five (4-0-1). It was Elliott's second shutout of the season.

“He obviously had some big saves to make and he made them,” Flyers coach Alain Vigneault said. “The guys in front of him played hard.”

The goals by Hayes and Niskanen were short-handed.

Jonathan Bernier stopped 28 shots for Detroit, which was blanked for the sixth time this season. It was the second time the Red Wings have been shut out in consecutive games.

“I thought we were not very good at all. I thought Bernie kept us in the game,” coach Jeff Blashill said.

Laughton gave the Flyers a 1-0 lead 9:31 into the second period. He beat Bernier on the short side from the inside edge of the right circle with a shot along the ice. It was Laughton's ninth goal.

“I'm just trying to find areas where I can get a chance. Obviously, the team is playing really well and I thought we were good tonight,” Laughton said. “We possessed the puck and created a lot of stuff in the offensive zone.”

Hayes' goal 2:47 into the third made it 2-0. He picked up a loose puck after Red Wings defenceman Dennis Cholowski misplayed it just inside the Philadelphia blue line and had a breakaway. Hayes beat Bernier with a forehand shot for his 17th goal and fourth short-handed of the season.

Niskanen added an empty-net goal with 2:17 left. It was his second goal.

Philadelphia's James van Riemsdyk hit the post with a few seconds left in the first period.

Elliott stopped Tyler Bertuzzi from right in front with 6:54 remaining in the first.

NOTES: The 16 shots were a season low for the Red Wings. ... Detroit forward Andreas Athanasiou returned after missing 16 games with a lower-body injury. He replaced rookie RW Filip Zadina in the lineup. Zadina, the No. 6 overall pick in the 2018 NHL draft, will be out two to three weeks with a lower-body injury. … Philadelphia D Shayne Gostisbehere missed his ninth game with a knee injury but is expected to return Thursday against New Jersey.

Red Wings: At the Buffalo Sabres on Thursday.