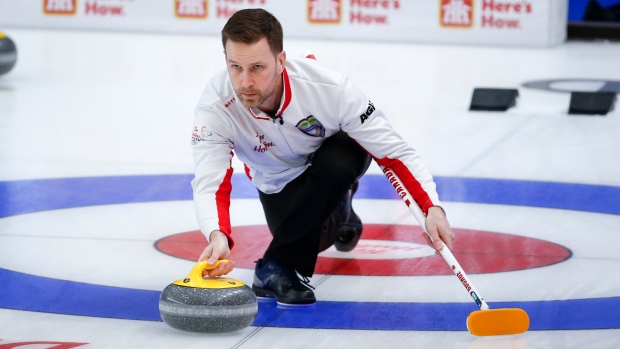 CALGARY — Brad Gushue picked up where he left off at the Canadian men's curling championship on Friday night.

In his first game with the full foursome of Mark Nichols, Brett Gallant and Geoff Walker since winning the Tim Hortons Brier a year ago, the defending champs showed few signs of rust in a clinical 6-2 win over Ontario's John Epping.

Canada shot 91 per cent as a team while Gushue threw a perfect 100 per cent, numbers he felt may have been a little too kind.

"To use a golf expression, there's no pictures on the scorecard," Gushue said with a smile. "There were some throws out there that were pretty gross. But we got a lot out of every shot.

"I think we only had one shot (that) we didn't get anything out of. That was a goal that we had coming into this game and I thought we executed that very well."

It was the long-awaited return of top-flight domestic men's curling after a season limited to just a few bonspiels due to the pandemic.

The opening draw at the Markin MacPhail Centre came on the heels of a successful Canadian women's curling championship, the first of seven events to be played in a so-called bubble setting at Canada Olympic Park.

Gushue's team played in a couple events last fall in Halifax with substitute players as the Alberta-based Walker remained out west.

The teams blanked the first three ends as they got a feel for playing on arena ice again.

Gallant made a brilliant triple takeout early on and jokingly waved to the cardboard cutouts stationed throughout the spectator-free arena.

Epping was heavy on a hit-and-roll attempt in the fourth end that set up a Gushue draw for two.

Ontario settled for a single in the fifth before a Gushue hit and roll set up another deuce in the sixth end. The teams shook hands after a Canada single in the ninth end.

"That was fun," Nichols said. "The leadup to this has been tough in terms of the isolation and stuff like that. So to get out there and play a competitive game -- it felt exactly how I thought it would.

"There was no easing into it or anything. We were just right back to it so it felt really good."

Ontario finished at 82 per cent overall and Epping was at 72 per cent.

For most teams, it was their first competitive game action in several months.

Some provincial and territorial teams were able to play down in recent weeks, but most rinks were invited by their respective associations when championships were cancelled due to the pandemic.

Two more wild-card entries were added this year, boosting the field to 18 teams. Gushue's team had an automatic entry as returning champions.

"The first game -- we were trying not to fall down and hurt ourselves," Gushue said with a smile. "The nervous legs and everything that we had. I felt pretty shaky from the combination of nerves and not practising as much as we normally do coming in. So my focus was just on that."

Players are staying in a hotel across the road from the WinSport Arena and are being tested for COVID-19 on a regular basis. Coaches and team alternates wore masks on the end benches.

Electronic hog-line sensors on the stone handles were not used for the second straight event due to equipment delays as a result of the pandemic. The honour system was in effect.

The top four teams in each pool will advance to the two-day championship pool starting March 12. The top three teams will move on to the playoffs on March 14.

The second- and third-place teams will meet in an afternoon semifinal with the winner to play the first-place team for the championship.

The champions will also represent Canada at the April 2-11 world men's curling championship in the Calgary bubble.

Kerri Einarson won the Scotties Tournament of Hearts last weekend. She'll represent Canada at the April 30-May 9 women's world curling championship, which was added to the bubble calendar Friday.

This report by The Canadian Press was first published March 5, 2021.