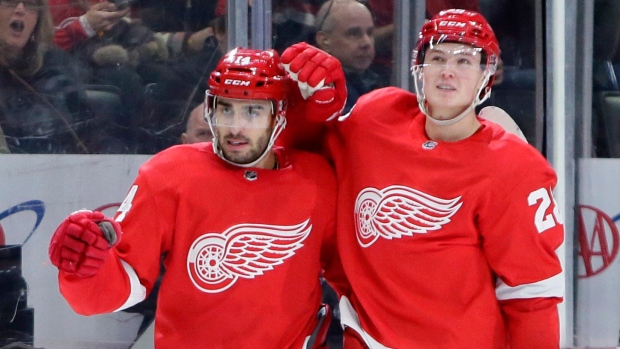 DETROIT — Tyler Bertuzzi and Robby Fabbri scored to give the Detroit Red Wings a two-goal lead and they held on to beat the Chicago Blackhawks 2-1 on Friday night.

“We have to take steps forward as individuals and as a team," Detroit coach Jeff Blashill said. “Let's do it now."

Jonathan Bernier stopped 32 shots for the Red Wings, who have an NHL-low 37 points and trail the rest of the league by 20-plus points.

“He was definitely a big difference out there, but we didn't get any luck," Chicago defenceman Duncan Keith said. “It seemed like he could see everything, even when I was shooting from the point, and he even got in front of the shots we tipped."

Patrick Kane scored his 31st goal with 1:05 left in the second period to pull Chicago within a goal. Corey Crawford had 23 saves for the Blackhawks.

Chicago is last in the Central Division despite having a winning record and its point total doubled Detroit's entering the game.

The Blackhawks had won four straight, one shy of their season high, to improve their chances of closing strong enough to earn a wild card in the playoffs.

Red Wings centre Dylan Larkin said the team will try to play the role of spoilers the rest of the regular season.

“It’s a lot of fun and no matter what, winning is better than losing," Larkin said.

The Red Wings got off to a good start with Bertuzzi's goal 20 seconds into the game. Fabbri scored his 14th goal midway through the second period, putting Detroit ahead 2-0.

“Fabs has been a big spark for us," Larkin said. “He’s a wiry guy and he works hard. He played the middle (centre) and I thought he carried the play well.”

Kane's one-timer was his 31st goal this season and it cut Chicago's deficit to a goal.

The Blackhawks had a power play midway through the third period and did not take advantage of the opportunity. They pulled Crawford late in the game to put an extra skater on the ice and could not pull into a tie to force overtime.

Chicago's Connor Murphy gingerly skated off the ice with 12 seconds left. The defenceman appeared to hurt his right leg, which took the brunt of the impact against the right post when he raced back to stop the puck from going into the empty net.

“Our guys are battling until the end, no question," he said.

NOTES: Chicago scratched D Lucas Carlsson (concussion) and D Adam Boqvist (right wrist) were scratched from the lineup. ... Blackhawks forward Zack Smith had back surgery and needs three to four months to recover. ... Bertuzzi has 19 goals, two away from matching his career high from last year. ... Detroit D Gustav Lindstrom had an assist for his first NHL point in his 14th game this season. ... Actors Jeff Daniels and Dave Coulier, both Red Wings fans, announced Detroit's starting lineup before the game in the team's dressing room. “I loved `Dumb and Dumber' so it was great," Bertuzzi said.