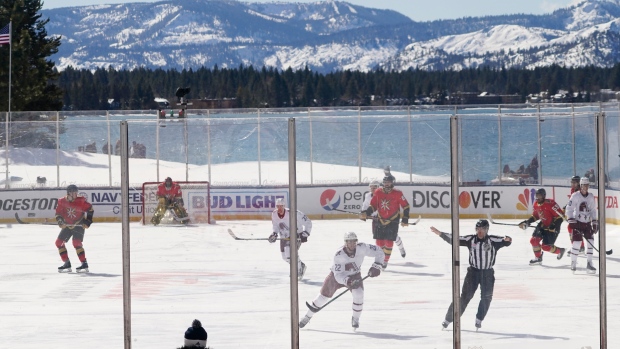 STATELINE, Nev. — The setting was spectacular but the ice conditions were far from it, leading to a more than eight-hour delay between the first and second period of the outdoor game between the Vegas Golden Knights and Colorado Avalanche at Lake Tahoe.

The NHL decided to halt the game Saturday afternoon because bright sun and temperatures hovering around freezing led to poor ice conditions that had players and officials repeatedly falling because of holes on the ice.

“We’ve done over 30 outdoor games,” Commissioner Gary Bettman told broadcaster NBC. "This has been the most difficult weather circumstance we’ve had, and it’s a beautiful day. But if you look up at the sun, the cloud cover is everywhere but where the sun is, and it did a number on the ice.”

The game was halted after the first period at 12:55 p.m. PST. Workers covered the ice soon after before removing the cover after the sun went down.

Bettman said some players wanted to keep playing while others didn't, but the final decision was made in consultation with the union because of safety.

“We kind of wanted to go back out," Avalanche captain Gabriel Landeskog said on NBC. "It’s probably a good decision that we moved it tonight, and we’ll be ready to go.”

Crews were working on the ice just before the opening faceoff and issues kept cropping up throughout the period.

The ice issues took away from the spectacular setting for the game, which is being played on a makeshift rink on the 18th fairway of a golf course on the shore of Lake Tahoe, with snow-covered mountains in the background.

It snowed overnight and into the morning before the sun came out. While the pristine conditions made for perfect views, it proved detrimental to the ice.

But the delay didn't alter Bettman's commitment to outdoor games, even in unconventional settings outside of a stadium venue like Lake Tahoe.

“This game was really taking the game out to its roots in terms of the surroundings," Bettman said. "Obviously, we tried to do something different in an unusual time, try and give our fans something special. The players were excited about it. ... We’re going to continue to do this, but we always knew and we’ll know going forward that when you play outside and ice is important, the weather conditions can affect whether or not we can play the game. We’ve been lucky to this point and I think we’re all disappointed but the teams have been great. ... And we move on. You can’t have success if you don’t risk failure.”

The Avalanche led the game 1-0 on a goal by Samuel Girard.

The NHL announced that Sunday's game between Boston and Philadelphia will be moved back by more than five hours to avoid the bright sunshine that is causing issues for the first game this weekend.

The game at Edgewood Tahoe Resort will now start at 4:30 p.m. PST. It had originally been scheduled for a noon local start and then was moved back to 11 a.m. earlier in the week because of the forecast.

The game also was moved from NBC to NBCSN, with the New Jersey Devils-Washington Capitals game previously scheduled for 7 p.m. EST now being changed to 2 p.m. and being broadcast on NBC.

Both teams were unable to practice on the specially built outdoor rink before Saturday's Vegas-Colorado game because of the ice conditions. They were forced to go to a local indoor rink instead.

“In this game, you have to learn how to adapt,” Flyers coach Alain Vigneault said.