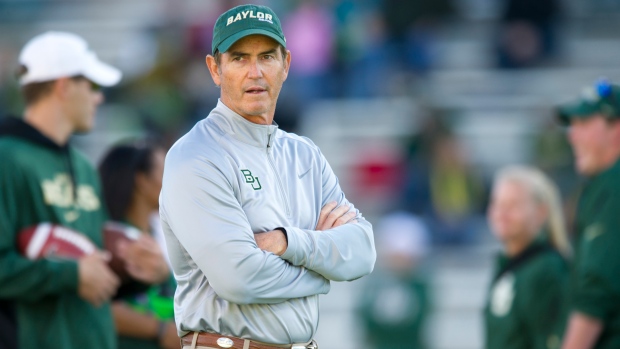 Art Briles won't be resuming his coaching career with the Hamilton Tiger-Cats.

"Art Briles will no longer be joining the Hamilton Tiger-Cats as a coach," the statement said. "We came to this decision this evening following a lengthy discussion between the league and the Hamilton organization.

"We wish Mr. Briles all the best in his future endeavours."

Briles, 61, was fired in May 2016 as Baylor's head football coach after an investigation discovered the school mishandled numerous sexual assault allegations, including some against football players. Hamilton CEO Scott Mitchell defending the hiring of Briles, saying the former NCAA head coach deserved a second chance.

Briles' appointment drew plenty of criticism on social media, including from Theo Fleury, the former NHL star who was sexually abused by his junior coach, Graham James.

"If you knew and didn't say anything then you are just as much a part of rape as the people who committed rape. Shame on #CFL," Fleury tweeted.

Many other people urged CFL commissioner Randy Ambrosie to step in and void Briles' hiring. Late on Monday, the league issued a statement regarding the matter.

"The commissioner is in continuing discussions with the Hamilton Tiger-Cats regarding the hiring of Art Briles as a coach," the statement said. "We will have no further comment until those discussions have concluded."

The Ticats didn't mention the circumstances of Briles' firing from Baylor in their release. And there were no comments regarding the hire from Jones, vice-president of football operations Kent Austin or owner Bob Young.

Mitchell didn't immediately return a telephone message. But he told 3DownNation, a football blog, both Young and the CFL were well aware of Hamilton's intention to hire Briles and the organization had no intention of rescinding the move.

"This is about giving someone a second chance and we're committed to doing that," Mitchell said. "For every reaction that you're getting from social media and media, there's a tremendous amount of support behind the scenes for a tough decision.

"I think a lot of people in this world, including myself, have made bad decisions and have regrets and I certainly feel strongly that in this case, Art Briles deserves a second opportunity."

What's more, the Ticats announced the hiring of Briles on the same day as they were scheduled to host a women's football clinic.

Barry's Jewellers Ltd., one of the Ticats sponsors, denounced the hiring of Briles.

"We strongly condemn and urge the team's management and ownership to immediately sever any ties they may have," the sponsor said in a statement. "Mr. Briles may or may not have a valid coaching track record, but to choose the chance of winning football over the importance of values goes beyond our core values and is absolutely not acceptable."

The jewelry retailer said it will be donating a portion of its sales over the next two months to the Sexual Assault Centre of Hamilton.

Briles accumulated a 99-65 overall record as an NCAA head coach at Houston (2003-07) and Baylor (2008-15). He guided the Bears to Big 12 championships in 2013 and 2014 and coached the program's only Heisman winner, quarterback Robert Griffin III who ironically is on Hamilton's negotiation list.

The hiring of Briles came at a time when the CFL was riding high on its wildly successful Diversity is Strength campaign. In fact, Ambrosie even spoke to CNN about the program, which was originally scheduled for launch this fall but was moved ahead following the violent protests in Charlottesville, Va., earlier this month.

But even with the decision to rescind Briles' hiring, two league officials said Monday night they feel the entire episode has undone most, if not all, of the positive PR generated by the Diversity is Strength program.

Hamilton (0-8) is the CFL's only winless team. Last week, Austin relinquished head-coaching duties and promoted Jones to that post.

Jones joined the Ticats following their embarrassing 60-1 road loss to the Calgary Stampeders on July 29.