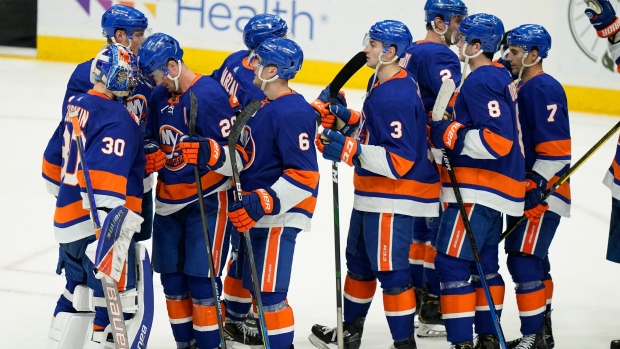 Mathew Barzal had a goal and an assist, and Jordan Eberle and Kyle Palmieri also scored for the Islanders. Ilya Sorokin stopped 23 shots to help New York snap a three-game losing streak and get its sixth regulation win in the last 23 games.

New York moved one point behind third-place Boston in the East Division. The Islanders visit the Bruins on Monday night. New York will face either Pittsburgh or Washington in the first round of the playoffs.

Andreas Johnsson scored for New Jersey while Mackenzie Blackwood made 22 saves. The Devils lost for just the second time in their last seven games.

Eberle opened the scoring for the Islanders with just under 2 minutes remaining in the first period. Barzal led a break across the blue line before orchestrating a give-and-go with Eberle, whose shot beat Blackwood short side and high. It was Eberle’s 16th goal of the season, equaling his total from last year.

Miles Wood had a chance on a breakaway to tie the game for the Devils with just under a minute left in the first but was unable to jam the puck past Sorokin.

A flurry of penalties early in the second period resulted in a 4-on-3 advantage for the Devils but they failed to capitalize. The Islanders finished their last home game of the season 2-for-2 on the penalty kill. New York’s home penalty kill of 92.3% for the season ranks second in the NHL since the league started tracking the stat in 1977-78, topped only by the 1998-99 Bruins (92.4%).

Johnsson scored for the Devils to tie the game at 1-1 nearly 5 minutes into the second period. Matt Tennyson’s pass from behind the net found Johnsson in the slot and he scored his fifth of the season — all of which have come on the road.

Nelson gave New York a 2-1 lead midway through the second period. Just 15 seconds after Will Butcher was sent to the penalty box for hooking, Nelson took advantage of a rebound in front of net.

Nelson scored again 3:40 later to give New York a two-goal advantage. Josh Bailey got a rebound and slid the puck across the slot to Nelson, who fired it past a lunging Blackwood for his 18th. It was Nelson’s second multi-goal game of the season. Bailey’s assist was his 349th for the Islanders, moving him into a tie with John Tavares for fifth on the franchise list.

The Islanders scored twice in 37 seconds early in the third period. Palmieri scored the first at 3:32 on a breakaway, netting his first goal against his former team since being traded from New Jersey to New York last month. Barzal then had a 2-on-1 break alongside Eberle but chose to shoot the puck himself for his 16th to mae it 5-1.

This was the Islanders’ 1,738th and final regular season game at Nassau Coliseum. Beginning next season, the team is moving to the new UBS Arena at Belmont Park. The Islanders played at Nassau Coliseum from their inception in 1972 until they moved to Barclays Center in 2015, returning to the Coliseum in 2018. New York finished 21-4-3 at home this season.

Johnsson and Wood both recovered from injury to return to the Devils’ lineup. Johnsson had missed the past six games with a lower-body injury, while Wood had missed one contest due to an upper-body injury. Tyce Thompson and Marian Studenic were benched to make room in the lineup.

Jonas Siegenthaler returned to New Jersey’s lineup from an eight-game absence due to COVID-19, taking the place of Connor Carrick. The Devils also announced that P.K. Subban will not play again this season due to his recovery from COVID-19. Subban has not played since April 18.

Cal Clutterbuck was a healthy scratch for the Islanders, who have been resting key players in preparation for the playoffs. Eberle, Leo Komarov, and Andy Greene returned to New York’s lineup after being rested for Thursday’s game against the Devils.

Devils: At Philadelphia on Monday night to close the season.

Islanders: At Boston on Monday night in the regular season finale.