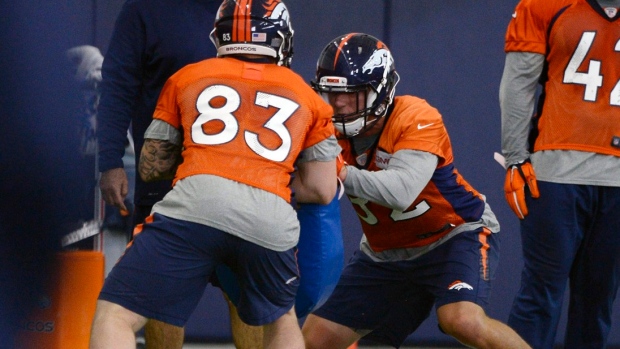 ENGLEWOOD, Colo. - Another prized pick from last weekend's NFL draft is expected to miss the season after suffering a major knee injury at a rookie minicamp. This time it's Broncos third-rounder Jeff Heuerman.

The tight end from Ohio State tore his left anterior cruciate ligament at a special teams practice Saturday afternoon and had to be carted off the field.

The workout had been moved indoors because of wintery weather that made the regular fields too slick.

Heuerman's injury came 24 hours after Jaguars first-rounder Dante Fowler Jr., was lost for the season with a torn left ACL. The former Florida defensive end was the No. 3 overall pick and the first non-quarterback selected in the draft.

The Broncos were counting on Heuerman to team with veterans Owen Daniels, Virgil Green and James Casey in a rotation of tight ends that is a hallmark of coach Gary Kubiak's offence.

Just Friday, Heuerman said: "it's nice to finally get out there on the field and play some actual football" after a "long pre-draft process."

Heuerman is the first player to sustain a major injury inside the team's state-of-the-art field house that opened late last year.

His injury makes it imperative for recent roster additions Dominique Jones and Joe Don Duncan to provide depth at the position the Broncos revamped this off-season with the departure of Pro Bowler Julius Thomas to the Jaguars.