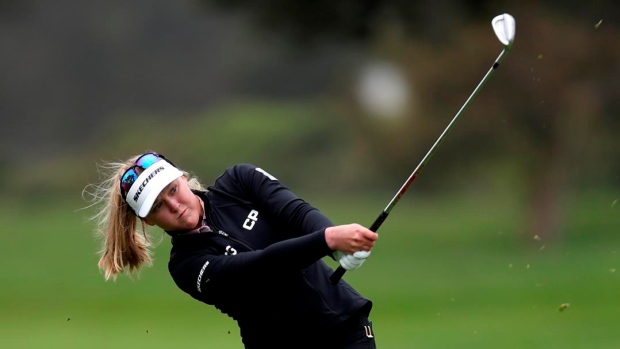 TOKYO — Canada's Brooke Henderson and Alena Sharp are heading into the women's golf tournament at the Tokyo Olympics having learned valuable lessons from the experiences of their male teammates.

Sharp, her caddy and wife Sarah Bowman, as well as coach Brett Saunders walked the course at Kasumigaseki Country Club on Friday, following fellow Canadians Corey Conners and Mackenzie Hughes around the Olympic course in the second round of the men's tournament.

Sharp and Henderson then got a hole-by-hole breakdown from Golf Canada's men's national team coach Derek Ingram. Perhaps most importantly, the two Canadian women spoke with Conners and Hughes before they flew back to North America to resume their PGA Tour seasons.

The advice from their teammates was straightforward: let 'er rip.

"This week is about freewheeling it. It's top three, that's the big thing out here," said Sharp, who also played 27 practice holes on Sunday and Monday. "There's no cut, there's no money list, there's no points, so it gives you a chance to free it up and go after it."

Henderson, ranked No. 8 in the world, said she was excited to go for it from the very first tee.

"I definitely play better when I'm aggressive," said Henderson. "I'm looking forward to chasing some pins when the opportunities present themselves."

Hughes and Conners had played more conservatively in the first two rounds of the men's tournament but found themselves in the middle of the 60-player field, just below par after 36 holes.

In Saturday's third round the two Canadian men decided to play more aggressively and it paid off, moving them up the leaderboard.

Taking calculated risks continued to pay off for Conners, who fired a 6-under 65 on Sunday to finish 13th, five shots back of gold medallist Xander Schauffele and two shots away from a berth in the seven-man bronze-medal playoff.

Hughes struggled in the fourth round, shooting a 4-over 75 to place 50th.

Those hard lessons learned by Conners and Hughes are not lost on their female counterparts.

"They had more success when they were pushing to make birdies and hitting driver off tees that they didn't the first two rounds," said Henderson. "I think you can learn a lot from that and hopefully we can take those smart risks and hopefully they pay off."

Both tournaments are a 60-player, no-cut field. Olympic qualifying rules stipulate that a country can send a maximum of four players, with most nations sending only two.

In theory, that makes the field weaker than an average LPGA Tour event, but neither Sharp nor Henderson are taking the opposition lightly.

"From the rankings standpoint it might seem weaker but all the players here are still extremely talented," said Henderson, who said the Olympics is like a sixth major.

"They're here for one reason and that's to get on the podium and represent their country."

Sharp noted that all the top players are still in the field, including all the major winners. She pointed to the men's tournament where Slovakia's Rory Sabbatini shot a 10-under 61 in the fourth round to move 15 spots up the leaderboard and win silver.

"Everybody's capable of that who's here," said Sharp. "We'll see how it goes. Just like Brooke what said, get yourself in good position and make a lot of birdies and we'll see how everything falls on our last round on Saturday."

Sharp will be the first of the two Canadian women to tee off on Wednesday, playing the first and second rounds in a group with Malaysia's Kelly Tan and Anne van Dam of the Netherlands. Henderson will begin her round 44 minutes later in a group with American Lexi Thompson and Yuka Saso of the Philippines.