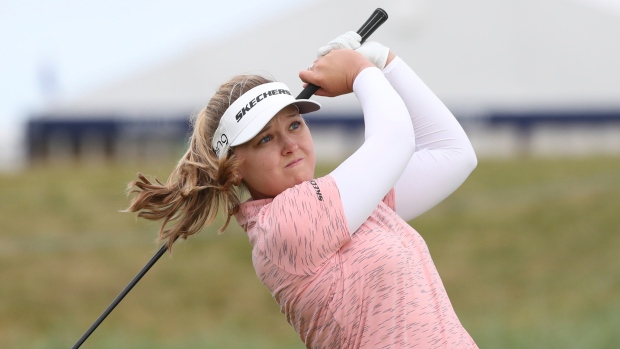 On a Sunday that produced a jam-packed leaderboard at the AIG Women’s Open, Brooke Henderson couldn’t find a path through the traffic to move up and get into contention. A score of even-par 72 left her back in a tie for 13th.

But the result also continued a dry stretch for the Smiths Falls, Ont, golfer. Including the Olympics, where she tied for 29th, Henderson has gone eight starts without a top-10 finish, the longest stretch of her career.

Sunday was a day of running on the spot and not getting any momentum. After starting with birdies on the third and fifth holes, she gave those shots back with bogeys at nine and 10. She recorded a bogey on the par-5 12th and made a birdie on the 14th, also a par-5, and came home with a string of pars.

She only managed to find five of 15 fairways and 11 of 18 greens in regulation. She also used her putter 31 times

The tournament brings to an end a busy schedule for Henderson and many of the top players on the LPGA Tour. In the past five weeks, Henderson has gone U.S.A.-France-U.S.A.-Japan-U.S.A.-Scotland-U.S.A. That’s more than 50,000 kilometers not to mention eight time zones at its widest. She’ll have a chance to put her feet up now with the next event, the Cambia Portland Classic starting on Sept. 16. Henderson is a two-time winner of that event.

Anna Nordqvist emerged as the champion, taking a one-shot victory over Lizette Salas, Georgia Hall and Madelene Sagstrom. The Swede fired a three-under 69 on Sunday to get through a tangle of players that at one point in the afternoon saw a six-way tie for the lead.

It was the third major title for Nordqvist, who also has a Women’s PGA Championship and an Evian Championship on her resume. She snapped a streak of nine majors won by first-time champions.