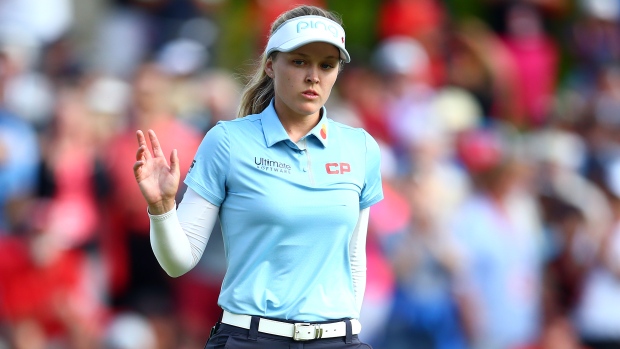 When the LPGA Tour returns to action next week after a long pause, Brooke Henderson won’t be in the field. In fact, she will skip the first three tournaments on the schedule, making her debut at next month’s AIG Women’s Open in Troon, Scotland.

After averaging 29 tournaments in each of the past four years, Henderson is taking a different path to what remains of this season, focusing on the four majors and the CME Group Tour Championship. She’s also not rushing back, preferring to take a wait-and-see approach to how things develop in an uncertain time.

“I going to build my year around those tournaments and then look at adding in some others,” she stated. “Right now, we’re going to take every precaution we can to stay safe.”

Henderson praised the LPGA Tour for the work it’s done to plan for a safe environment at each stop. She also pointed to the success of the PGA Tour’s return with a small number of positive tests. But she stressed she is going to be extra cautious this season.

“I think it’s going to be a year where you’ll need to have a lot of patience,” she said. “I’m uncertain about how I’ll feel when I get out there.”

There is genuine reason for concern. The women’s circuit is the only golf tour that plans to continue with fans and pro-ams, although the number of tournaments that will do that is dropping. The first five stops on the restart will not have spectators.

The tour is following the program being used on the PGA Tour where all players will be tested before the start of every event and have restricted access until a positive result is determined. But the LPGA Tour will also travel to a number of different countries and any player who tests positive will need to quarantine in a foreign land.

While Henderson’s final schedule is not set in stone, there’s a possibility she may only play the four majors and the LPGA Tour’s season finale. She will look at playing other stops as the season progresses.

The CME Group Tour Championship is slated for Dec. 17-20.

While playing just five tournaments the rest of the year seems unusual, a look at the tour’s calendar shows it’s not that drastic a move.

There are 14 stops after the Women’s Open, including the other three majors and the Tour Championship. Four tournaments are in Asia and it’s uncertain how many North American-based players will travel there or if they will even be held. That leaves just six other events that Henderson could add to her schedule.

For her first tournament, the LPGA Tour and R&A have worked out an arrangement with the U.K. government to allow players competing in the Open to skip the 14-day quarantine. They will be required to take a COVID-19 test seven days prior to departure and have a certified negative test result before arriving. The same thing will happen on the way home prior to boarding an LPGA charter bound for the United States.

The 22-year-old has spent the stoppage in play at home in Smiths Falls, Ont., where she’s played throughout the Ottawa Valley. She admitted she’s not really certain of the competitive status of her game at the moment since her last start was in mid-January.

“Around the local courses, I’m looking really good,” she joked.

Staying grounded for so long is new for Henderson who has been a road warrior since she became a teenager. It’s allowed her to spend time with her family, read and learn more about cooking. She admitted that she’s not quite ready for an appearance on Master Chef Canada but said she can whip up a pretty tasty tuna casserole.

One difference in the break has been a separation from her sister, Brittany, who remained in Florida when the pandemic hit. They will be reunited when Brittany comes back to Canada prior to leaving for the Open Championship.

“It’s such a crazy world right now,” Henderson stated. “It’s made me reflect on how fortunate I am to be an LPGA player and to play golf for a living and travel all over the world. I know it’s a difficult time, but these last few months have really made me see the positives in life.”