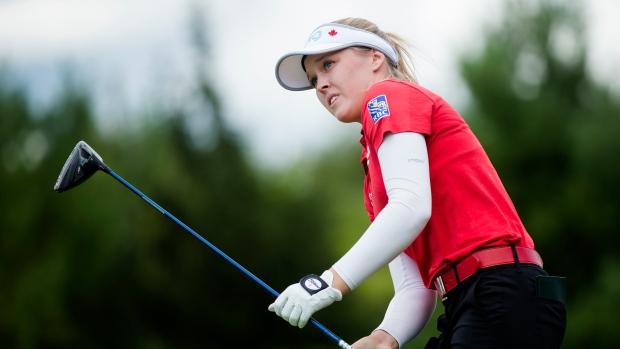 AURORA, Ont. — After Brooke Henderson birdied No. 15 she stood back from the green to check her notes and watch groupmates Stacy Lewis and Min-Jee Lee finish the hole.

A small voice behind her called her name and she turned, giving a smile and a quick fist bump to a young fan decked out in red and white golf gear. Then it was back to work for Henderson as she tried to stay in contention at the CP Women's Open on Friday.

"Sometimes you just see a little kid smiling at you and wanting a high five, and it takes you out of the moment for a second," said Henderson by the practice green at Magna Golf Club. "I feel like that's good. Kind of brings you back to real life, I guess you could say.

"They just have so much belief in you, and I think that kind of inspires me a little bit."

Henderson, from Smiths Falls, Ont., shot a bogey-free 3-under 69 in the second round, finishing at 9 under overall. She's three shots back of Denmark's Nicole Broch Larsen, who had back-to-back 66s to sit atop the leaderboard at 12 under heading into the third round.

The field at this year's CP Women's Open is one of the toughest on the LPGA Tour, with 96 of the top 100 money earners competing. That puts pressure on Henderson to defend her crown after ending a 45-year drought by Canadians at their national championship last year at Wascana Country Club in Regina.

"I'm happy with where I am, to be close to the lead and know that I could have played a little bit better today" said Henderson, who was tied with China's Yu Liu and Thailand's Pajaree Anannarukarn after two rounds. "I feel confident going into tomorrow that I could get on a run and make a bunch of birdies, which is always a great feeling.

World No. 1 Jin Young Ko was in sole possession of second, one stroke behind Broch Larsen. Ko captured two of the LPGA Tour's five majors this year, winning the ANA Inspiration and the Evian Championship.

"I like Brooke. Hopefully she likes me too," said Ko with a laugh. "We have a great relationship on the Tour and she helps me with my Bible readings, everything, so I like her."

Broch Larsen has just one top-10 finish this year. Two years ago she tied for third at the CP Women's Open after holding a third-round lead with Mo Martin at Ottawa Hunt and Golf Club.

"I feel like I'm more confident in this position now than I was two years ago even though I haven't been here for a while," said Broch Larsen. "Whatever the next few days brings, I'm still really happy with my two rounds."

Quebec City's Anne-Catherine Tanguay was the only other Canadian to make the cut. She started the day tied with Henderson one back of the lead but shot a 2-over 74 to fall into a tie for 25th in the morning wave.

Tanguay rebounded after a disastrous three-hole stretch from Nos. 4-6 featuring a bogey and two double bogeys.

"It was a pretty rough start. Really happy with my comeback," said Tanguay. "Honestly didn't feel bad at all this morning. I was feeling great, and even better than yesterday, I want to say.

"So it was a bit shocking for me to make these mistakes early in the round, but I think I was just lacking a little bit of commitment on my decisions, and maybe a few decisions that are questionable."

Michelle Liu, a 12-year-old from Vancouver, shot a 10-over 82 and will miss the cut at 19 over. She was the youngest player in the history of the tournament, earning her spot by finishing as top Canadian at the national women's amateur championship earlier this month.

Hamilton's Alena Sharp just missed the cut, with a 1-under 71 on Friday leaving her even par overall, one stroke too many for the cutline.

Other notable Canadians to miss the cut included Brittany Marchand of Orangeville, Ont., and Canadian Golf Hall of Famer Lorie Kane of Charlottetown, who was competing in her 29th national championship.