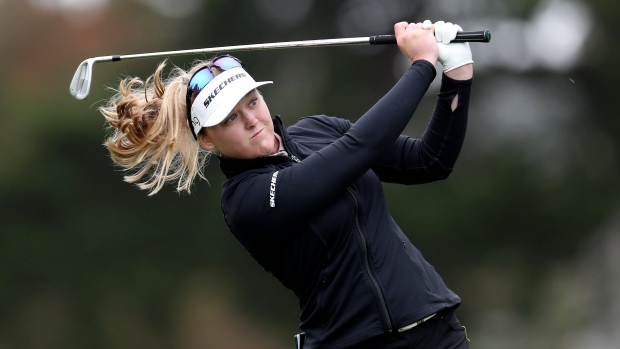 Canada's Brooke Henderson is right in the thick of things after two rounds at the Women’s British Open.

Henderson fired a three-under round of 69 on Friday and sits three shots off the lead at four-under heading into the weekend.

The Canadian got off to a flying starting on Friday, picking up four birdies on her opening nine holes and was bogey free through 15.

But for the second time in as many rounds, Henderson bogeyed the par-3 16th - her only dropped shot of the day - and shot one-over on the back nine.

Meanwhile, Georgia Hall is making a run at another Women’s British Open title.

The 2018 champion shot 3-under 69 and was tied for the clubhouse lead with Mina Harigae of the United States on 7 under overall midway through the second round of the final major of the year.

In the last five years at the Women’s Open, no player has more rounds in the 60s than Hall’s nine — she shot 68 on Thursday — and that is filling the 25-year-old English golfer with confidence heading into the weekend at Carnoustie.

“I do feel very calm when I am playing the British Open,” said Hall, who won at Royal Lytham three years ago for not just her first major title but her first senior win as a professional.

“It is just so nice to play in front of the crowds. We missed that last year and to hear them cheering my name is great. I’m having a lot of fun," she said.

The morning starters were greeted with benign, even balmy, conditions on Day 2 at Carnoustie and the relative lack of wind was leaving the course — widely regarded as one of the most fearsome in the world — defenseless.

Hall took advantage, with her sixth birdie of the day — from 6 feet at the 14th — giving her a one-stroke lead on 9 under.

A double-bogey 6 at No. 15 dropped her into what would shortly be a four-way tie for the lead and she parred her way home to join Harigae, who rolled in a long, winding birdie putt at the last to complete a round of 67 that contained seven birdies in all.

No. 4 Sei Young Kim followed four birdies on the front nine with four bogeys after the turn, a round of 71 leaving her one stroke off the lead. The South Korean had been in that four-way tie on 7 under with Hall, Harigae and Lexi Thompson, who bogeyed two of her final five holes for a 70 and was on 5 under.

Kim was tied for third with Lizette Salas (69).

Sophia Popov, last year's unlikely champion at Royal Troon when ranked No. 304, double-bogeyed the last hole after three-putting to shoot 75 and was set to miss the cut.

Top-ranked Nelly Korda, who was in a share of the overnight lead with Kim and Madelene Sagstrom, was among the afternoon starters.