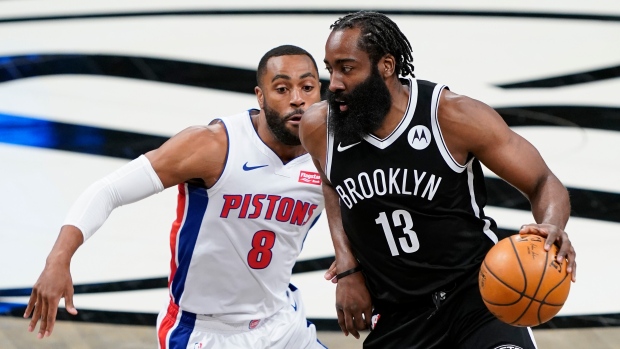 NEW YORK (AP) — James Harden could return for the Brooklyn Nets on Wednesday night after missing more than a month with a strained right hamstring.

The Nets are listing Harden as probable to play in their home game against the San Antonio Spurs. It would be the All-Star guard's first game since April 5, when he aggravated the injury in a game against the New York Knicks.

Harden has since missed 18 games. He also sat out the two before the game against the Knicks, when he attempted to play but left again after barely four minutes.

He then had a setback in his recovery, keeping him out longer than initially hoped.

The Nets are 27-7 in games in which Harden has played.

Brooklyn has had its superstar trio of Harden, Kevin Durant and Kyrie Irving on the court together for only seven games. It's unclear if that will change Wednesday, as Irving is questionable after having to leave a victory in Chicago on Tuesday with a facial contusion.