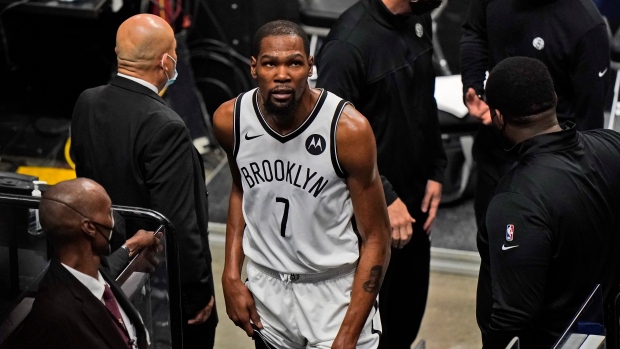 MIAMI — Kevin Durant's thigh is the new big concern for the Brooklyn Nets.

Durant was forced to leave the Nets' game in Miami on Sunday early in the first quarter with a bruised left thigh, and Brooklyn coach Steve Nash said it'll likely be Monday at the earliest before the team knows whether it will keep the two-time NBA Finals MVP out of more games.

“We'll see how he wakes up and go from there," Nash said. “But right now, nothing's been determined."

Durant exited with 7:57 to go in the opening quarter. He scored Brooklyn's first eight points of the game before coming out, and the team quickly announced he would not return because of what was being called a contusion.

“I imagine they're going to assess him in the morning and see if a scan is necessary or not," Nash said.

Durant has missed 33 games this season, with 24 of those related to a left hamstring injury. He missed six others in accordance with the league's health and safety protocols related to the coronavirus and three more for injury management.

“The timing of everything this season, this year, it's just a telltale sign of what life is right now in terms of the uncertainty of a lot going on," Brooklyn guard Kyrie Irving said. “Anything can happen at any moment. ... We just pray that it's not too serious and he's able to recover."

Durant appeared to be injured on a drive just 1:33 into the contest and missed both free throws — only the second time this season that he went 0 for 2 on a trip to the foul line. He remained in the game for about 2 1/2 more minutes before leaving for further evaluation and ultimately the diagnosis that would keep him out for the remainder of the game.

The Nets were also without James Harden while he works his way back from a hamstring issue.

“We've had plenty of guys out of the lineup. ... Nothing new for us," Nash said.

Miami won the game 109-107, on a buzzer-beating jumper by Bam Adebayo.