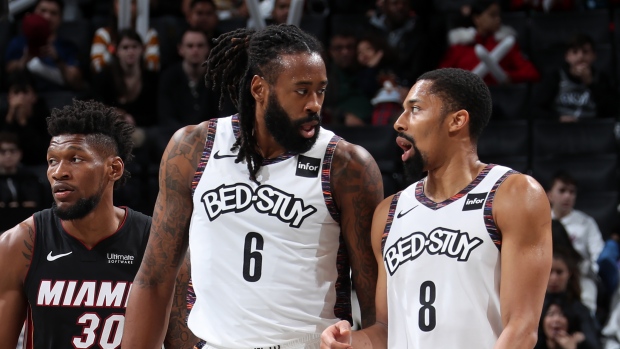 NEW YORK — Spencer Dinwiddie and DeAndre Jordan said Monday they have tested positive for the coronavirus, potentially leaving the Brooklyn Nets without two starters when the NBA season resumes.

Jordan said he won't be in Florida with the Nets when they return from the suspension of the 2019-20 season, while Dinwiddie told The Athletic that he was experiencing symptoms and it was unclear if he would be at Disney’s ESPN Wide World of Sports complex.

At least six players on the Nets have tested positive for the virus. The other four were back in March, when Kevin Durant said he was one of them.

Both players said they tested positive after returning to New York to rejoin the team. Some players left the city, which was a hot spot at the time, after the NBA halted play.

Dinwiddie said he tested negative for the virus multiple times after returning to Brooklyn and took part in a couple practices. But he has since tested positive and said he has a fever and chest soreness.

His absence would be a significant blow to the Nets, given he has played so well this season with Kyrie Irving out of the lineup because of injuries. He is averaging 20.6 points.

Jordan announced his status on Twitter, saying he learned of his diagnosis Sunday night and it was confirmed again Monday.

The centre signed with the Nets last summer along with Durant and Irving. The 2016 U.S. Olympic gold medallist spent most of the season as a reserve but had moved into the starting lineup for both games after Jacque Vaughn replaced Kenny Atkinson as coach in March.

The Nets have a half-game lead over Orlando for seventh place in the Eastern Conference. They are set to face the Magic on July 31 in their first game back.