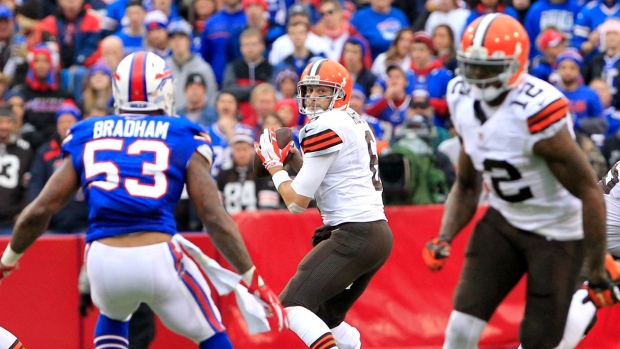 BEREA, Ohio - Quarterback Brian Hoyer is positive he should be the starter for the rest of this season. He should be the one leading his team to the playoffs. He's convinced.

The Browns aren't as certain.

A day after he was benched by coach Mike Pettine in the fourth quarter of a loss at Buffalo, Hoyer said Monday that he hasn't lost any of his confidence despite three straight poor performances and believes he should keep his job over rookie Johnny Manziel.

"You don't get to 7-5 in the NFL just lucking into it," Hoyer said. "It's been a lot of hard work, and I think I've proven that I've gotten us to this point. I feel like I can carry us through the next four games."

Hoyer was replaced by Manziel in the fourth quarter of Sunday's 26-10 loss to Buffalo after throwing two interceptions, continuing a pattern of bad games over the past month.

In his past three games, Hoyer has thrown just one touchdown pass, six interceptions and the Browns have scored just 36 points.

Pettine has not yet decided who will start this week against Indianapolis. He'll meet with his staff — and general manager Ray Farmer — on Tuesday and intends to inform Hoyer and Manziel of his decision Wednesday. Pettine said he's not leaning in either direction, and insists the choice comes down to one standard.

"I've said it a million times," he said. "Who gives us the best chance to win this weekend?' Period."

The Browns (7-5) remain in the thick of the AFC playoff race, but Pettine said Cleveland's post-season hopes won't affect whether he sticks with Hoyer or switches to Manziel, who came in and sparked a "stagnant" offence on Sunday.

"For us involving the playoffs, we have to win and that's the bottom line," Pettine said. "It's not like anything beyond that would influence the decision. It's 'Who gives us the best chance to win this weekend?" It's that simple. It makes it easy when you look at it like that and shut out everything else."

As Hoyer has done all season — after a win or loss — he was at his locker Monday to discuss the previous day's game.

For the first time since September, he walked away not knowing if he'll be doing it again next week. Hoyer, though, isn't worried about anything other than getting ready for the Colts.

"I'm studying my tape on Indy, and I would do the same if I wasn't," he said. "That's just the way I've always prepared. For me, nothing's changed. I go about my business the way I handle it every week, and that's his right. He's the head coach. He gets to make those decisions."

Pettine acknowledged the Browns discussed making a move at quarterback following a 23-7 loss to Houston on Nov. 16. Hoyer threw a franchise-record 30 incompletions that day while being harassed by J.J. Watt and the Texans' defensive front.

In his first season as an NFL head coach, Pettine hasn't been faced with a tougher decision than the one he's about to make. He's conflicted.

"I don't know where I want to go, and it's certainly important," he said. "We'll spend a lot of time on it. I'll lean on the people I trust to help make it."

Up until his recent slide, Hoyer had earned the trust of Pettine and his teammates. He hasn't completely lost it, and Cleveland's issues are not specific to the quarterback position. Hoyer has spent the season trying to hold off the immensely popular Manziel, whom the Browns drafted in the first round to be their future quarterback.

Hoyer may have finally lost the fight.

Browns right guard John Greco appreciates what Hoyer has been up against.

"Give the guy credit. He's got a lot of things he's battling," Greco said. "He feels like he's the guy and we do, too, and it's his job. And he's been our leader all year, but decisions are out of our hands, and we're going to roll with it no matter what they choose."

For Hoyer, there's a bottom line, too. He's helped get the Browns, who had lost at least 11 games in each of the past six seasons, back in the playoff hunt. No, he doesn't run like Manziel or have as strong an arm, but he's won and that should mean something.

NOTES: Browns WR Miles Austin remains hospitalized in the Buffalo area with a kidney injury sustained Sunday. Pettine doesn't know when Austin, who had seven catches for 86 yards, got hurt. ... Pettine said the team is waiting for the rib injury to TE Gary Barnidge to "quiet down" before it's known how long he'll be out. Pettine was drilled in the side by the helmet of a Bills defender after making a catch in the first quarter.