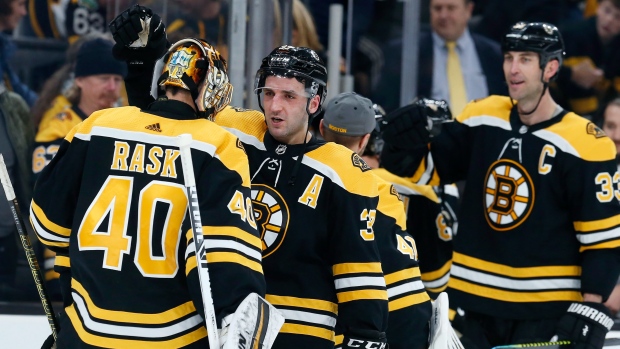 Boston Bruins head coach Bruce Cassidy isn't ruling out resting players when the team returns to play in the round robin ahead of the NHL playoffs.

As one of the top four teams in the Eastern Conference, the Bruins have already clinched a playoff spot, but will play three games to determine seeding for the postseason. The remaining 16 teams in the NHL’s Return to Play format will take part in a best-of-five series to determine the remainder of the playoff field.

Boston had the best record in the NHL when play was paused in March, but Cassidy said it may not be worth risking injury to try to retain the top seed.

“We absolutely could rest players,” Cassidy told NBC Sports Boston. “The first area we start with, Tuukka [Rask] is our guy.  We’re very confident in [Jaroslav] Halak, but Tuukka is our playoff goaltender and he was going to start Game 1 [of the playoffs] with all things being equal. What does he need?

"Do our veterans need all three games to get to the top of their game? Even if they do, should we play them and risk injuries? There’s a lot that goes into it. I think every team is probably going to have a little of the same approach [in the round robin] and they are going to want to be at their best and healthiest headed into the playoffs.

"Would we like to win all three games? Of course, in a perfect world, but I think with all teams there’s going to be some sort of a preseason mentality worked in with how the lineups are constructed every game. But if the [veteran players] want to play every game then I’m going to listen to them. It’s their bodies and they would know best. Then in the last game in the third period we’re going to shut our eyes and hope nobody gets hurt in those situations.”

Bruins president Cam Neely said last month he was "disappointed" the Bruins would have to take part in the round-robin to determine their seeding after leading the league in the regular season.

The Bruins will face the Washington Capitals, Tampa Bay Lightning and Philadelphia Flyers in the round robin when the NHL returns to play later this summer.