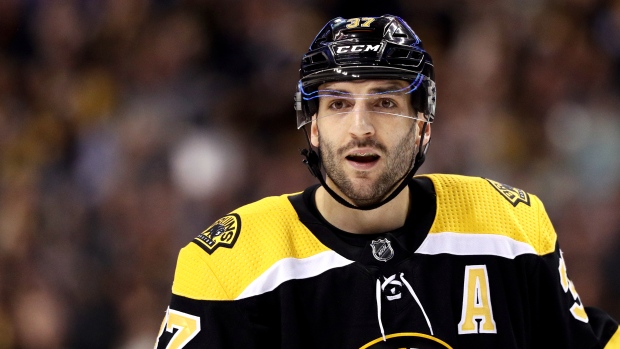 It looks like the Boston Bruins will be without forward Patrice Bergeron for an extended period of time.

The team announced that Bergeron sustained a rib and sternoclavicular injury during the second period of their game on Nov. 16 against the Dallas Stars.

Patrice Bergeron sustained a rib and sternoclavicular injury during the second period of the Bruins vs. Stars game on November 16 in Dallas.

He will be re-evaluated in approximately four weeks. #NHLBruins

Kathryn Tappen of NBC Sports was the first to report Bergeron could miss a large chunk of the season. The Bruins announced he met with doctors on Monday to assess the severity of the injury.

Hearing the Bruins will be without top line center and 4x Selke Trophy winner Patrice Bergeron for “an extended period of time”... w/ upper body injury.

The latest, and most significant, on a list of injuries for the B’s.

The 33-year-old was injured after taking a hard hit into the boards. He flew back to Boston to be evaluated which caused him to miss Saturday's game in Phoenix against the Coyotes.

In 19 games so far this season, the four-time Selke Trophy winner has nine goals and 17 assists.

Bergeron will be re-evaulated in approximately four weeks.

Boston will be back in action on Wednesday as they take on the Red Wings in Detroit.