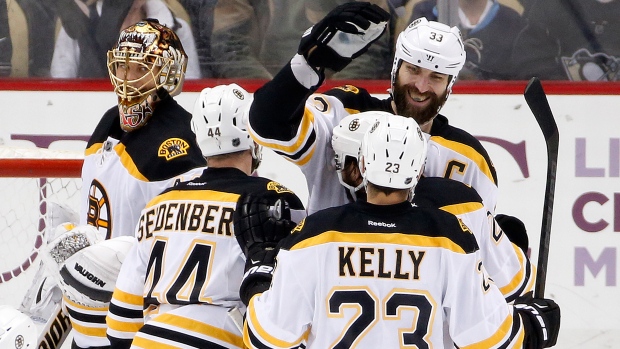 PITTSBURGH, Pa. - Being oblivious probably wasn't the worst thing for Tuukka Rask. It took the Boston goalie a while to notice that the opposing Pittsburgh Penguins were playing without Sidney Crosby.

"I didn't know Crosby wasn't playing until 5 minutes left in the first," Rask said Saturday after he stopped 30 shots in a 2-0 victory over the Penguin.

"I wasn't paying attention, and then I started looking for him and he wasn't out there."

It was Rask's third shutout of the season, 26th of his career and first against Pittsburgh.

Left winger Milan Lucic scored in the first period, and defenceman Zdeno Chara added an empty-net goal for the Bruins. They won their fifth game in a row and moved to 7-0-1 in their past eight as they attempt to move out of a wild card in the Eastern Conference and into the top three in the Atlantic Division.

With 82 points, they are three back of third-place Detroit in the division.

Crosby, who leads the Penguins with 70 points, skated in the pregame warmup before being a late, surprise lineup scratch.

"I would say it's not an injury," Penguins Coach Mike Johnston said. "He didn't get himself injured in the warmup. He just wasn't feeling well and went to see the doctors."

Pittsburgh also played most of the game without its other star centre, Evgeni Malkin, who limped to the dressing room after being hit by Boston left winger Chris Kelly 1:29 into the first period. Malkin returned and played 4:15 in the first period, then sat out the remainder of the game.

Johnston did not specify the nature of Malkin's injury, but he said Malkin and Crosby "might be able to play" Sunday against Detroit.

Johnston noted that Pittsburgh's power play, which was 0-for-3 with four shots, was particularly impacted by the absence of Crosby and Malkin.

"They're a different team when those two guys are missing," Rask said. "Makes my job easier, I guess."

That, and typically stingy Bruins defence that made Lucic's goal the only one they really needed.

Lucic scored to make it 1-0 at 9:53 of the first on a shot from the left hash marks that caromed in off of the blocker of Pittsburgh goaltender Thomas Greiss.

"Being able to get that first goal and establish a lead, it takes a lot of pressure off of us," Lucic said.

That was it for any scoring until 37.7 seconds remained in regulation, when Chara iced it for the Bruins.

The Penguins eventually settled on reconfigured lines, with wingers Nick Spaling and Daniel Winnik shifting to centre, but it was chaotic early without Crosby and Malkin.

"You go out there in warmup and take your line (rushes), and then a couple of things change," Pittsburgh centre Brandon Sutter said. "Especially early in in the first period, it was kind of a mad scramble figuring out lines.

"After that, once the second and third period comes along, we definitely kind of settled into it and got our lines together and battled hard."

At a stoppage during a Pittsburgh power play more than seven minutes into regulation, forward Craig Adams joined the Penguins bench after taking a quick warmup skate.

Adams had originally been listed as an official scratch from the lineup, but the NHL issued a statement that said Adams was allowed to be a late substitution for Crosby under Rule 7.1, "which states that changes to the starting lineup must be reviewed and approved by the referee prior to the start of the game. Proper procedure was followed."

Bruins Coach Claude Julien had no objection, perhaps because Adams has 55 career goals, none since Oct. 28, while Crosby is three goals shy of 300.

"They said they were bringing in (Craig) Adams instead of Crosby and if I was OK with it, and I said as long as Crosby doesn't come back I'll take it," Julien said.

NOTES: Pittsburgh defenceman Christian Ehrhoff returned after missing the previous six games and 18 of the previous 19 because of concussion symptoms. To make room in the lineup, the Penguins scratched rookie Derrick Pouliot. ... Penguins centre Maxim Lapierre played in his 600th career game. ... Defenceman Zach Trotman, recalled on an emergency basis, did not play and was brought up as insurance because an illness has been circulating among the Bruins, Julien said. ... Boston plays at Washington on Sunday night.