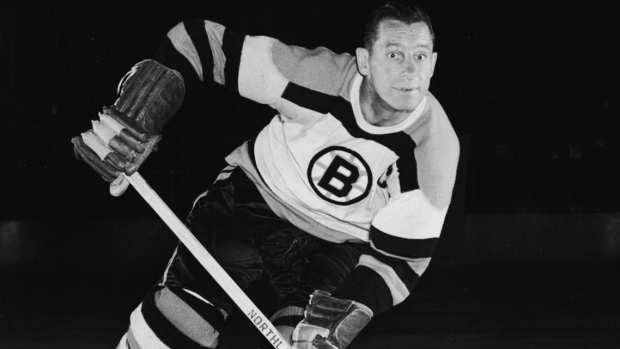 Boston said goodbye to the man known as "the ultimate Bruin."

The hockey club observed "a moment of celebration and applause" for Milt Schmidt before its game against the Edmonton Oilers on Thursday night, a day after the former captain, coach and general manager died at the age of 98.

The hall of famer had been the oldest living former NHL player.

"Milton Conrad Schmidt arrived here on Causeway Street in 1936. And, in many ways, he never left," the public address announcer told the crowd at the new Boston Garden. "Milt Schmidt embodied everything we know about being a Boston Bruin."

Schmidt helped the Bruins win two Stanley Cup titles before enlisting in the Royal Canadian Air Force months after the attacks on Pearl Harbor. He returned to claim the 1951 Hart Trophy as the NHL MVP and went on to assemble the Boston teams that won two more championships with Bobby Orr in the 1970s.

The Bruins dipped Schmidt's retired No. 15 from the rafters in the pregame ceremony and played a video of his career highlights. In lieu of the usual moment of silence, the announcer asked for "a moment of celebration and applause," and the crowd responded.

"I'm sure he would have liked that," Bruins goalie Tuukka Rask said after the game, a 4-3 loss to the Edmonton Oilers. "That tells you a lot about the guy he was."

More videos were played during the breaks between periods. Schmidt's No. 15 was painted on the ice behind the nets. The Bruins also wore patches on their sweaters in his memory.

"You kind of got to be a part of the Bruins history with him," said Oilers forward Milan Lucic, who spent the first eight years of his career in Boston. "I was happy that I got here and it happened to be tonight. I got to be a part of it, and I'll know he'll be missed in the city and in the organization."

A native of Kitchener, Ontario, Schmidt was the centre of the "Kraut Line" with Bobby Bauer and Woody Dumart that finished as the top three scorers in the league in 1940.

Despite missing three full seasons for World War II, Schmidt retired at the age of 36 with 229 goals, 346 assists and 466 penalty minutes.

As coach, Schmidt reached the Stanley Cup finals in 1957 and '58. But he had left the bench and taken over as general manager when Bobby Orr made his debut in 1966.

At the trade deadline that season, Schmidt orchestrated the deal that brought Phil Esposito, Ken Hodge and Fred Stanfield to Boston from the Chicago Blackhawks. With the future hall of famers Orr and Esposito, the Bruins went on to win the Stanley Cup in 1970 and again two years later.

"I got to know Milt when I arrived in Boston, and I quickly learned that he was an outstanding ambassador for the game of hockey, a true gentleman, and that he epitomized what it means to be a Bruin," team president Cam Neely said this week.

"When people today talk about 'Bruins Hockey,' they talk about the style that Milt created, and generations of Bruins after him tried to emulate."