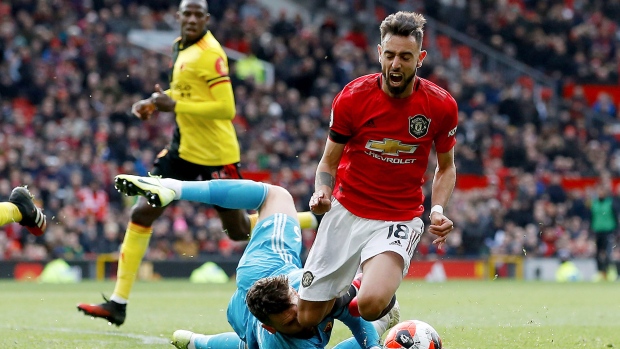 MANCHESTER, England — Bruno Fernandes coolly rolled in a penalty for his first goal for Manchester United to set his new team on its way to a 3-0 win over relegation-threatened Watford in the Premier League on Sunday.

Anthony Martial also netted, for the third straight game, and teenager Mason Greenwood added a brilliant third goal as United climbed above Tottenham and Sheffield United into fifth in the standings. That is currently a Champions League qualification place following Manchester City’s recent two-season ban from European competitions by UEFA.

Fernandes has slotted seamlessly into the United team since his January move from Sporting Lisbon. After grabbing his first assist in the 2-0 win over Chelsea on Monday, the Portugal playmaker got on the scoresheet for the first time against Watford.

He was brought down by Watford goalkeeper Ben Foster - a former United player - as he surged through into the area, and got himself up to impudently roll home the 42nd-minute spot kick, sending Foster the wrong way.

It was no surprise to see Fernandes taking penalty duties, having scored 12 out of 12 from the spot when at Sporting.

"In today's market I think we got a good deal," Solskjaer said of Fernandes, who moved to United in a deal worth up to 80 million euros ($88 million).

“He's given everyone a boost. It means more than just getting a player in. You can see the supporters, they're used to players with that personality, mentality and quality so he's been a big plus.”

Watford striker Troy Deeney thought he had equalized in the 52nd when he bundled in following a corner, but the goal was disallowed by VAR because the ball struck the arm of teammate Craig Dawson as the defender went for a header off the cross.

Watford, which stayed in the relegation zone with 11 games left, was further punished when Martial made it 2-0 with a cheeky finish after his initial shot was saved by Foster. The French forward collected the loose ball, beat Etienne Capoue with a lovely drag-back, and chipped Foster from an acute angle.

"I am delighted with the week Anthony's had," Solskjaer said. "He has got his critics and I am one of his biggest probably because I keep demanding different stuff from him.

"The skill (for the goal) is just mind-blowing ... But I want more from him and I'll keep at him.”

Watford winger Gerard Deulofeu curled a shot onto the crossbar before Greenwood made the points safe, collecting Fernandes’ inside pass and rifling a fierce shot into the roof of the net from just inside the area.

Odion Ighalo, the former Watford striker signed by United from the Chinese Super League on transfer deadline day last month, came off the bench for his home debut and struck the post with a shot in the 84th after rounding Foster.