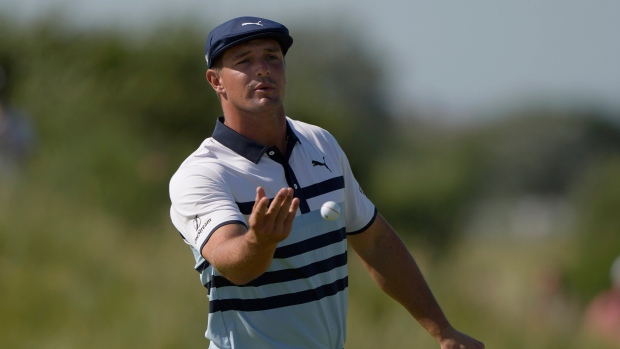 Bryson’s world is never boring, that’s for sure.

As part of the final testing before leaving for the Tokyo Olympics, Bryson DeChambeau tested positive for COVID-19 and will miss the Games. He’ll be replaced on the American team by Patrick Reed.

“I am deeply disappointed not to be able to compete in the Olympics for Team USA,” said DeChambeau in a statement to USA Golf. “Representing my country means the world to me and it is was a tremendous honor to make this team. I wish Team USA the best of luck next week in Tokyo. I will now focus on getting healthy, and I look forward to returning to competition once I am cleared to do so.”

DeChambeau is the sixth-ranked golfer in the world and earned his spot on the U.S. Olympic team after Dustin Johnson opted out of competing. The other three members of the squad are Justin Thomas, Xander Schauffele and Collin Morikawa.

DeChambeau has been a controversial figure in golf since returning from the pandemic. He gained a reported 35 pounds of muscle and changed his swing to create as much clubhead speed as possible. His long drives have become a jaw-dropping fixture on the PGA Tour, although they don’t always find the fairways.

As well, the 27-year-old has been in the spotlight for a number of controversial comments such as publicly calling out his equipment company for making an inferior driver. He has also been front and centre in a back-and-forth spat with Brooks Koepka.

Reed was set to undergo three rounds of testing on Sunday and Monday before making the trip to Tokyo. He played for the American side at the 2016 Olympics, making him the first two-time Olympian in golf for the U.S.

Reed, also no stranger to controversy, was named to the team over Patrick Cantlay and Brooks Koepka, who were both listed ahead of him on the U.S. Olympic ranking. It is not known if the other two golfers opted out.

“I am so excited to have the opportunity to represent our country and be a part of Team USA in Tokyo,” Reed said. “I wish Bryson nothing but the best, and I know how disappointed he is to not be able to compete, and I will do my best to play my best and represent our country.”
“We’re obviously disappointed for Bryson, as we know how much he was looking forward to representing the United States in his first Olympics,” said Andy Levinson, USA Golf Executive Director. “But we’re thrilled that Patrick Reed is excited to play for his country when he is called upon, even with the strenuous testing protocols and he is set to arrive just in time to compete – on a golf course he will have never seen prior to the start of competition. It really illustrates the importance of the Olympics and the value Patrick places on playing for Team USA and for his country.  We’re excited to welcome him to Tokyo soon and know he’ll be a formidable competitor for Team USA.”

The first round of the men’s event is set for Thursday at the Kasumigaseki Country Club.