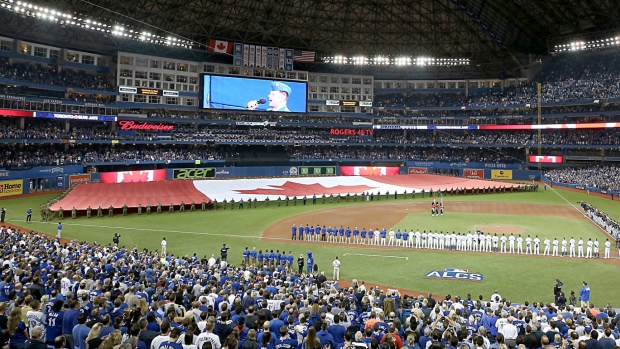 TORONTO — The Toronto Blue Jays finally got the federal clearance they were looking for in order to hold summer camp north of the border Thursday afternoon, but where the club will play games this season is still very much up in the air.

With federal, provincial and municipal health authorities signing off on most aspects of the plan this week, the final hurdle was cleared when the federal government granted an exemption that will allow them to modify the mandatory 14-day quarantine period for travellers entering Canada.

“It basically involved adapting a strategy and plan that satisfies their public health concerns,” Blue Jays president Mark Shapiro said on a conference call Thursday evening. “Things like additional testing above and beyond MLB testing, satisfying their concerns on travel, ensuring that, basically, what we were doing is creating a modified quarantine or a bubble environment that protected the public.”

In order to satisfy all of the health authorities involved, the Jays will create a “closed environment” with Rogers Centre and the attached Marriott City Centre Hotel, which has a huge block of their 348 rooms reserved for baseball purposes.

Essentially, Blue Jays players and staff will be locked in an area of the hotel and will have movement restricted to and from the baseball facilities.

Now, the Blue Jays will do their best to convince the government that visiting teams coming to Toronto for the club’s 30 home games — they’ve scrapped the idea of playing their three exhibition games and will instead play intra-squad games to get ready for the season — will adhere to the same quarantine rules.

At the very least, this exemption has bought the Jays time to work through that plan with government authorities, leading up to the expected July 24 opener, but Shapiro is hoping for clarity within the next two weeks.

“We will look to end up with a similar result where we protect the public in every way possible, but we have to deal not just with our team coming in and out of the country but the visiting team as well,” Shapiro said.

“There are a host of travel-related and logistical issues that create complexities that we still need to work through to satisfy, particularly with Public Health (Agency of) Canada. We’ll look to do that in the next week. I think it’s probably pretty important that we get some clarity on where we’re going to be playing our games in the next 7-10 days now that we’ve cleared the hurdle for training.”

At worst, if it’s clear the government won’t sign off on AL East and NL East teams entering the city this summer, the Jays will be training in a much safer place than COVID-19 ravaged Florida over the next three weeks, and could return to Dunedin for games later this month if need be.

There’s still confidence the full plan will be approved and Toronto will be the home for a full 60 games through Sept. 27, but Shapiro said they’re looking at some alternatives that does not include TD Ballpark, their spring training home.

This week, Jays players and staff started the intake screening process outlined in the 101-page 2020 MLB operations manual Wednesday in Dunedin — two coronavirus tests, antibody testing, and a 24-48 hour quarantine period — and only players who test negative for COVID-19 twice will be permitted to charter to Toronto this weekend.

Once they land at Pearson International Airport, they’ll take private buses staffed by screened personnel to Rogers Centre where “players and club personnel will not leave the stadium footprint — including the hotel grounds — travelling between the hotel and ballpark within the stadium boundary,” the club outlined.

It’s a logical plan that could work if — and it’s a big if — every single player, club staff member, and support staff worker buys in 100 per cent.

But we all know this virus doesn’t discriminate and there are many ways you can envision this going sideways, not just for the Jays but for baseball as a whole.

The Blue Jays believe their players will buy in.

The government agreed when it granted the modified quarantine exemption.

None of this will be a surprise to the players, Shapiro says, as they’ve been part of the process leading up to this point.

The big question is whether visiting teams would have the same buy-in, something the government isn’t convinced of yet and will need more time to work through with MLB and the Blue Jays.

Over the next couple of days, players who have tested negative twice this week during intake testing will be able to get on the field for workouts in Dunedin, before the team starts chartering virus-free players to Toronto this weekend.

Ideally, the Jays will be on the Rogers Centre turf Monday, preparing for a season that will be unlike any other.

If the virus doesn’t get in the way first.​