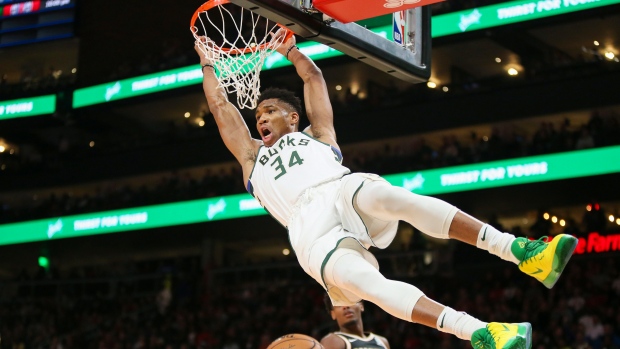 It’s reasonable to think Milwaukee is not going to win all 21 of its remaining games, which means not all is lost for the Golden State Warriors this season.

They’ll still be the only team in NBA history to win 73 games.

The Warriors were a record 73-9 in the 2015-16 season, and the Bucks fell to 52-9 with their loss in Miami on Monday night. But there’s still a chance Milwaukee could be able to make a case as the most dominant team in league history in one regard — margin of victory.

This season’s Bucks are outscoring teams by 12.26 points per game. That’s on pace to be second-best in NBA history, just a smidge behind the mark of 12.28 set by the 1971-72 Los Angeles Lakers — a team with a Hall of Fame coach in Bill Sharman, four Hall of Fame players in Wilt Chamberlain, Gail Goodrich, Elgin Baylor and Jerry West, and a player who would become a Hall of Fame coach in Pat Riley.

And the Bucks are in that stratosphere.

“We’ve still got a lot more basketball to play,” guard Wesley Matthews said. “And we know where we’re at and where we want to be. It’s a pretty special thing to be where we’re at in the standings.”

Matthews then offered a sentence that should send shudders across the rest of the NBA: “There’s a lot of room for improvement and growth.”

The way the Bucks are going, they’ll have the No. 1 seed in the Eastern Conference race sewn up by the last week of March and probably home-court advantage for the entirety of the NBA playoffs wrapped up not long afterward. And yet they’re still focused on finding ways to get better.

Milwaukee coach Mike Budenholzer was asked if it’s difficult to be critical when a team is off to one of the best starts in NBA history.

He didn’t hesitate before answering.

“It's not hard,” Budenholzer said. “I mean, it's I guess part of what makes coaching either maddening or a lot of fun. You can always push them to be better and there's always things we can do better and when we lose there's things that we do well and it's not all terrible. So hopefully we walk that line of keeping our guys, you know, hungry and growing and improving and recognizing when they do things well also.”

Milwaukee was on pace for 71 wins before Monday’s loss; now, the pace is for 70. It’s likely that some players will be rested once the Bucks clinch all that can be clinched in the regular season, though Budenholzer also understands the delicate balance and the need to be playing the right way when the playoffs start in basically a month and a half.

“At the end of the day you’re going to win some games and lose some games,” Bucks star and reigning NBA MVP Giannis Antetokounmpo said. “We’re not going to go 82-0.”

The goal for the Bucks is clear — win 16 games in the playoffs.

The rest, to them, doesn’t seem to matter much.

That dubious mark won’t be caught this season. Well, probably not, anyway.

For the first time since 2015, a team — maybe more than one — with a losing record is likely going to get into the post-season. Orlando and Brooklyn are both well below the .500 mark and yet still have comfortable holds on what would be the last two playoff spots in the Eastern Conference. Memphis has the No. 8 spot in the West, also with a losing record.

It could raise questions about why the NBA would want an expanded post-season format, the so-called “play-in” notion where the No. 9 and No. 10 teams from each conference would have a shot at making the field through a mini-playoff.

Such games would be dramatic, which would be nice.

Such games would also open the door to more bad teams getting into the playoffs, which wouldn’t be so nice.

Expect competitive balance across the NBA to be a big talking point again soon. After Monday’s games, the league had 12 teams with winning percentages of .600 or better, one team at .597 — Dallas, a mere game away from topping .600 — and the other 17 teams all below the .500 mark.

A game to keep an eye on each day in the coming week:

Wednesday, Orlando at Miami: Orlando’s Aaron Gordon and Miami’s Derrick Jones Jr. face off for the first time since the dunk contest at All-Star weekend.

Thursday, Toronto at Golden State: This matchup obviously meant so much more in June, though it may be the night Stephen Curry finally returns for the Warriors.

Friday, Milwaukee at L.A. Lakers: Obviously could be an NBA Finals preview, and the Bucks will be looking to sweep the two-game season series.

Saturday, Atlanta at Memphis: Their second meeting in less than a week, and it should be a Trae Young vs. Ja Morant elite-guard showdown.

Sunday, Indiana at Dallas: The Mavericks won in Indianapolis last month without Luka Doncic, though the Pacers have started to get back to form of late.

Monday, Milwaukee at Denver: The Nuggets won in Milwaukee on Jan. 31, a 12-point victory that is the biggest defeat the Bucks have absorbed at home this season.