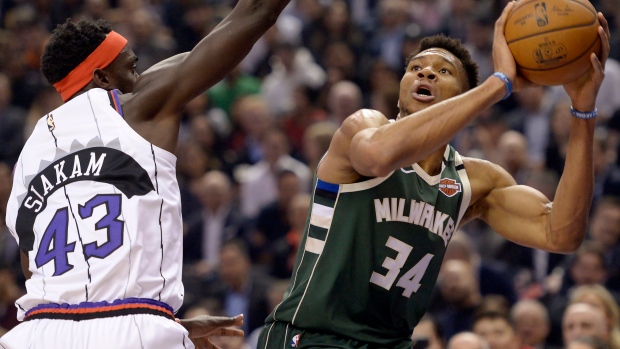 TORONTO – The Milwaukee Bucks weren’t lacking for motivation on Tuesday night, you can be sure of that.

What did they see when they walked into Toronto’s Scotiabank Arena just a few hours before taking on the team that knocked them out of the playoffs nine months ago?

They saw a familiar backdrop, the scene of last spring’s Eastern Conference Finals, for the first time since their elimination at the hands of the Raptors in Game 6.

They saw the spot on the floor where Kawhi Leonard threw down that vicious one-handed slam-dunk on Giannis Antetokounmpo, unofficially sealing their fate. They saw the rim where new papa Fred VanVleet drained three after three. They saw Drake, the Raptors’ global ambassador and resident antagonist, arrive 30 minutes early – a tell-tale sign that this was a big game – wearing not one, but two championship belts.

They were reminded of the 2-0 series lead they let slip away, their four straight losses, and the devastating feeling they had the last time they left that building.

Was that on their mind?

“Of course,” admitted Antetokounmpo, following his team’s 108-97 win over the rival and defending champion Raptors. “You always remember the last time you play here, the problems you had. It was definitely on my mind.”

Tangibly, the Bucks don’t have much to play for these days. They’ve already clinched a playoff spot – the earliest a team has done so in 15 years. Barring a spectacular late-season collapse, their seven-game lead atop the Eastern Conference – eight-game lead, after the win – should be a big enough cushion to seal first place. Mostly, they’re chasing history now – they’re on pace for 70 wins, which would be third most all-time.

But they wanted this one. The Raptors did too, to be fair.

Toronto got off to a quick start in this highly anticipated showdown between the East’s top-two teams – the first time they’ve faced off since the Raptors lost an early-November meeting in Milwaukee.

Neither team could make a shot early on, a product of the league’s two-best defences imposing their will on each other. However, with Toronto’s best players – Pascal Siakam, Kyle Lowry, Fred VanVleet and Serge Ibaka – all struggling to score, an unlikely duo stepped up.

Together, energy big man Chris Boucher and sparingly used sharpshooter Matt Thomas totalled 19 first-half points off the bench. At the time, that was more than Siakam, Lowry and Ibaka had combined to score. It was also more than Bucks all-stars Antetokounmpo and Khris Middleston had registered.

The Raptors led by 12 points with two minutes remaining in the second quarter when the momentum shifted, and the home team could never get it back. Not really.

Defensively, the Raptors looked like the NBA’s second-ranked team, even as things started to go sideways. They’ve been special on that end of the floor all season, it’s what’s kept them in games they’ve had no business being in, and it gave them a chance again on Tuesday. They held Milwaukee to 38 per cent shooting and Antetokounmpo, the NBA’s reigning MVP, to just 19 points on 5-for-14 (though he did have 19 rebounds and eight assists).

“We were incredible [defensively] for 22 minutes,” head coach Nick Nurse said. “There was hardly a bad possession. They were shooting air balls all over the place, tough shots, we were active, all over the place. I think our lack of scoring [hurt us]. When we play these guys or played Golden State [last season], you’ve got to score with ’em. I think our lack of scoring, all of a sudden, that takes a little bit of juice out of your defence. And I think that was probably the case tonight. You start missing shots and you start losing a little defensive energy, and then your defence isn't as good either.”

They cut the deficit to five points early in the fourth quarter, and then to seven in the final few minutes, even after the game seemed lost. They’re scrappy and they never quit, but they didn’t need a game against the NBA’s best team to learn that about themselves.

What they may have learned is how they have to attack another elite defence. After holding Toronto to 97 points on 35 per cent shooting, the Bucks are surrendering a league-low 101.7 points per 100 possessions – the stingiest mark since the 2015-16 San Antonio Spurs held opponents to 98.2.

Led by the length of Antetokounmpo and the size and veteran savvy of Brook Lopez, their defence feels like it’s practically impenetrable at the rim. Teams are shooting just 60 per cent against Milwaukee inside of six feet – the best mark in the association. They don’t just protect the bucket, they deter opponents from even bothering to attack it. Only 29 per cent of the opposition’s attempts come around the rim – also tops in the NBA.

Like many teams before them, the Raptors couldn’t overcome Milwaukee’s interior defence. But that’s not the worst of it. They were reluctant to even get in the paint as a means of initiating the offence and creating open looks on the perimeter. The result was a lot of tough shots. Toronto took a season-high 52 three-pointers and made 35 per cent of them. That’s not bad, but it also wasn’t good enough considering the trouble they had generating easier looks.

As much as the Bucks wanted this game, it means very little to them in the grand scheme of things. They’re playing for something far bigger than another late-February win.

The Raptors could have used injured centre Marc Gasol, especially on a night when his replacement, Ibaka – who’s been fantastic this season – shot a dreadful 2-for-15 from the field and 1-for-10 from three-point range. They could have used Norman Powell, too. But there would have been an excuse to use regardless of which team came out on top, assuming you were looking for one. The Bucks were playing the third game in four nights and went to overtime in Washington on Monday.

At the end of the day, though, these were the NBA’s two hottest teams, evenly matched, coming in playing some of their best basketball. It was a good and well-earned win for the Bucks.

Win or lose, this was always going to be an instructive – albeit tangibly insignificant – game for the Raptors. They’ll see the Bucks twice more before the end of the regular season, and maybe they’ll square off again in the playoffs. This was an important opportunity for them to get a better look at the team they’re chasing, see what works against them and – perhaps more important – what doesn’t, and collect data for a game in which they’ll really need it. And those games are coming.

“We saw some spots where we need to get better,” VanVleet said. “At the end of the day, we think we know who is gonna be at the end. Once we get to the playoffs, it’s a completely different game. Give them credit, they did enough to beat us and we didn’t do enough to get the win. Sometimes it’s just as simple as that.”​