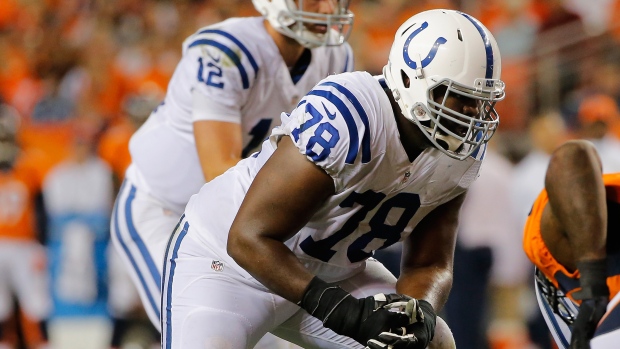 TAMPA, Fla. - The Tampa Bay Buccaneers addressed a need for help on the offensive line by signing right tackle Gosder Cherilus to a two-year contract.

The seventh-year pro fills an opening created when Demar Dotson sprained his left knee during last weekend's preseason opener at Minnesota. Dotson has started 47 of 48 games over the past three seasons, and the Bucs aren't speculating when he might return.

"Demar went down, we needed some offensive line help," coach Lovie Smith said, confirming the addition of Cherilus after practice Monday. "It's good that a player like that is available."

Cherilus was released by the Indianapolis Colts last month with three seasons remaining on a five-year contract he signed in 2013. He started 29 games over two seasons with the Colts.

The 31-year-old tackle entered the league as a first-round pick of the Detroit Lions — No. 17 overall — in 2008. He played five seasons with the Lions and has made 100 starts.

Dotson's injury means the Bucs could begin the regular season with up to three new starters on the offensive line. Rookies Donovan Smith and Ali Marpet have been working with the first offence at left tackle and right guard after being selected in the second round of the draft.

Smith said Dotson's injury will not require surgery. The coach declined to discuss specifics, other than to describe it as a sprain.

"We have the medical reports in, but I'm just not going to go into details. He's out. We brought another player in," Smith said. "He's going to be out for a period of time. Hopefully not a long period of time, but he'll be out for a while ... and we have to move on."

Meanwhile, the NFL announced injured defensive tackle Akeem Spence has been suspended without pay for the first game of the season for violating the league's substance abuse policy.

The suspension stems from Spence's January 2014 arrest on a possession of marijuana charge in Alabama. He has been sidelined all of training camp after undergoing off-season back surgery.

The third-year pro has started 19 games over the past two seasons. He had one sack as a rookie and three in 2014.