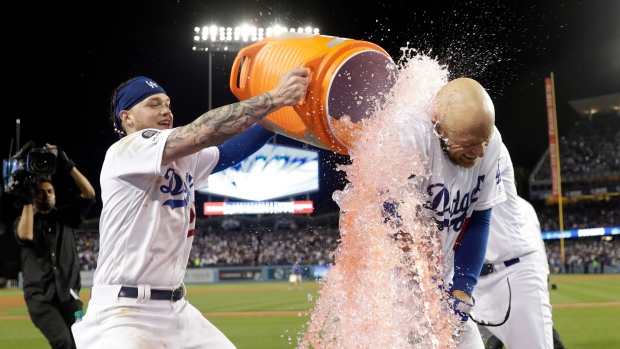 LOS ANGELES — Walker Buehler never let up. His fastball touched 97 mph in the ninth when Nolan Arenado struck out swinging for his career-high 16th and last punch out of the game.

Buehler pumped his fist into his glove — nothing too cocky for this soft-spoken Kentuckian — and walked off the mound with no expression on his face while the crowd erupted.

"Just checking another box for me," the 24-year-old right-hander said. "Thanks to Doc (manager Dave Roberts) for letting me go back out there."

Buehler pitched his first complete game and the Los Angeles Dodgers rallied on rookie Matt Beaty's two-run homer in the bottom of the ninth and beat the Colorado Rockies 4-2 Friday night.

With two outs, Max Muncy drew a seven-pitch walk and Beaty followed with a shot to centre field off Jairo Diaz (1-2).

He got soaked with the contents of the drink container and was coated in white powder on his bald head to wild cheers from the sellout crowd of 54,044.

"It just felt like I was floating around the bases," Beaty said. "Hitting a walk-off homer is no better feeling."

Beaty was recalled from Triple-A Oklahoma City earlier in the day, although he never left Los Angeles.

Buehler's nine innings and 111 pitches were career highs. He gave up two homers, and the only other hit he allowed was a first-pitch single to Charlie Blackmon in the ninth. The right-hander's strikeouts were the most in the major leagues this season.

"Anytime you do something for the first time it's got a little more meaning," said Buehler, who singled in the eighth.

Buehler's scoreless innings streak ended at 20 on Nolan Arenado's homer with two outs in the fourth. The streak began in the sixth inning on June 3 in Arizona.

"Got some calls and some bad swings in counts," Buehler said. "Arenado and Blackmon hit maybe the two worst pitches of the night."

The NL West-leading Dodgers have won nine in a row against the second-place Rockies. At 52-25, the Dodgers are off to their second-best start in franchise history, trailing only the 1974 squad that began 53-24.

The game matched Buehler and German Màrquez, who squared off in Game 163 last year to decide the NL West title, won by the Dodgers.

Neither starter gave up a walk Friday.

"That was a great matchup between two young starting pitchers that are two of the best in baseball," Rockies manager Bud Black said. "They went toe-to-toe. Well-pitched by both sides. It came down to a fastball in the middle of the plate."

Màrquez gave up two runs — one earned — and five hits in eight innings. The right-hander struck out eight.

Blackmon's 18th homer with two outs in the sixth tied it 2-all.

The Dodgers took a 2-1 lead on Cody Bellinger's 25th homer in the fourth.

Arenado's 19th homer tied it 1-all and came a night after he left the game at Arizona for precautionary reasons with a left big toe contusion.

"If I didn't bump into the wall I think I had a decent chance to catch it," said Beaty, who played left.

Dodgers: RHP Josh Sborz went on the IL with lower back tightness.

HE SAID, HE SAID

Dodgers third baseman Justin Turner was ejected from the dugout by home plate umpire Chad Fairchild for arguing in the fourth. The rest of the bench had been getting vocal at the same time.

"He looked in the dugout and said, 'That's enough,'" Turner said. "I waved and said hi and apparently he thought that was offensive."

Turner had asked Fairchild about a called strike during his leadoff at-bat earlier in the inning.

"He kind of snapped back at me and said, 'Obviously it's a strike or I wouldn't have called it,'" Turner said. "I don't know if he was having a bad day."

Turner and Fairchild have history together. The umpire ejected him in September 2017.

"I have great relationships with 99.9% of the umpires," Turner said. "He'll be a third base tomorrow so I'm sure there'll be a conversation about it."

Joc Pederson got his first start at first base for the Dodgers and Beaty moved to left field.

Beaty found out about the switch after batting practice. Roberts was going to try Pederson out Saturday but moved it up a day.

Rockies: RHP Peter Lambert (6-6, 2.0 ERA) makes his fourth start in the majors 30 miles from his hometown of San Dimas. He beat the Cubs in his first two starts and had a no-decision in his third against San Diego.