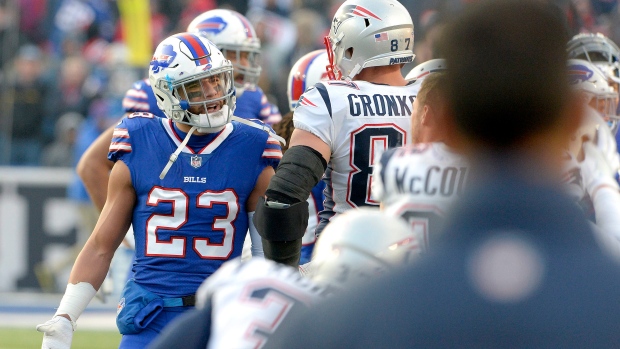 Hyde and Gronkowski , The Canadian Press

Recently re-signed Buffalo Bills safety Micah Hyde says he's tired of the disrespect his city and team get from the rest of the NFL.

"They’re going on visits and I’d be like, ‘Hey man, come to Buffalo,’" Hyde told Matt Parrino of New York Upstate. "They’d be like, ‘I’m cool. I’m gonna go somewhere else. Well, you know what? At the end of the day I bet they’re pretty pissed off they didn’t take those visits to Buffalo. Now they’re probably sitting on their trash team or sitting on the couch somewhere else because they didn’t come to Buffalo."

Hyde signed a two-year extension with the AFC East champions on Friday that will take the 30-year-old Fostoria, OH native through the 2023 season. A fifth-round pick out of Iowa, Hyde spent the first four seasons of his career with the Green Bay Packers. When he went into free agency in 2016, the Packers didn't make an offer to retain his services.

“I wasn’t somebody that everybody was chasing after and wanted or was the top guy," Hyde said. "So when I was getting love from Buffalo I was like, cool,” Hyde said, noting that he, too, was reticent about heading to Western New York before ultimately signing with the Bills.

In his four seasons with the Bills, Hyde has emerged as a Pro Bowler and formed an effective partnership at safety alongside Jordan Poyer, one that Pro Football Focus ranked as the league's seventh-best.

With the Bills now firmly ensconced in the AFC's elite, Hyde believes now is the time to put the finishing touches on a championship team with players who want to be in Orchard Park.

"There’s just a lot of guys that think Buffalo is the old Buffalo, not winning and all that," Hyde said. "It’s disrespect because the city is an amazing city. The team and organization are amazing. "At the end of the day we’re trying to win football games, and if you don’t want to be in Buffalo, don’t come. … If I’m able to finish my career in Buffalo, that’s the ultimate plan.”