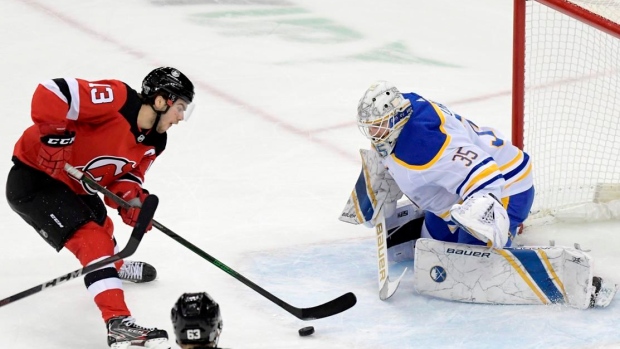 Rasmus Asplund and Dylan Cozens broke the game open early in the third period with goals in a 1:34 span that send the Devils to their third straight loss. Cody Eakin scored an empty-net goal with less than a second to play.

The win was the Sabres' second over the Devils in three days and only their second in the last seven games (2-5-0). They lost to the Islanders on Monday night.

MacKenzie Blackwood had 33 saves for New Jersey, which prevented Ullmark from getting his first shutout since 2019 when Nikita Gusev scored with 28 seconds to play.

Ullmark, making his fourth straight start, withstood an early surge by New Jersey and got some help from the post on a point shot by P.K. Subban in the third period. He made two great stops in the final minute before giving up a goal.

The Sabres came into the game with the NHL's third best power play, and it was clicking in the second period. Jack Eichel and Sam Reinhard hit goalpost on the first extra-man advantage, and Oloffson scored his seventh goal of the season on the second, which included another post by Eichel.

Asplund, who was elevated to the roster earlier in the day with Tobias Reider's injury, batted a deflected puck out of the air to push the margin to 2-0 at 5:16 of the third period. It was his first goal of the season and second of his 32-game career.

Cozens scored in close off a great feed from former Devil Taylor Hall.

Sabres F Jeff Skinner, who had not scored in 14 games, was a healthy scratch for the second straight game. Coach Ralph Krueger wants the one-time 40-goal scorer to watch a couple of games. He said the move was not disciplinary.

Earlier in the day, the Sabres announced William Borgen will miss up to two months with a broken right forearm. He was hurt in the first period against the Devils on Saturday and finished the game. Buffalo also lost fellow defenceman Jake McCabe for the season with a major knee injury in the game.

Buffalo was already without top defenceman Rasmus Ristolainen, who remains out indefinitely because of COVID-19.

Jacob Bryson was called up from the taxi squad and made his NHL debut, playing on defence with Colin Miller. He hit a goalpost with a first-period shot.

The teams face off again on Thursday, this time in Buffalo. It will be their third game since Saturday.