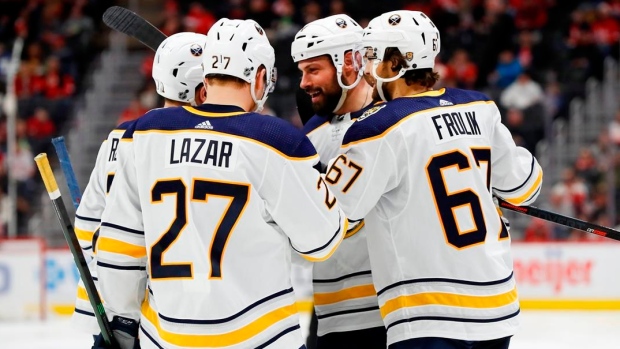 BUFFALO, N.Y. — The Buffalo Sabres have assigned Zach Bogosian to the minors after he cleared waivers on Saturday, though it's uncertain when or whether the veteran defenceman will report.

Bogosian's agent, Darren Ferris, didn't provide any hint of what his client's plans are in a text to The Associated Press.

“I will be meeting with Zach over the next couple of days to discuss his next steps,” Ferris wrote.

Bogosian's options are limited after the 12-year NHL veteran went unclaimed a day after being placed on waivers. He must report to Rochester of the American Hockey League, accept re-assignment elsewhere or risk losing out on what's left of the $6 million he is owed on the final year of his contract.

The Sabres responded by saying they had no new information to provide after announcing Bogosian's re-assignment earlier in the day.

Whatever happens, Bogosian's time in Buffalo is coming to an abrupt end, with his demotion coming a little over a week before the NHL's trade deadline, and a few months after the oft-injured 29-year-old requested a trade.

Bogosian has been limited to playing just 19 games this season after missing the first 22 while recovering from his second hip operation in three years. He was placed on waivers after being a healthy scratch in seven of Buffalo's previous eight games.

He joined the Sabres in 2015 in a multiplayer trade with Winnipeg that was then-general manager Tim Murray's attempt to rebuild the roster. The deal hasn’t panned out for Buffalo, which is now on its third coach and second GM and is in jeopardy of extending the NHL’s longest active playoff drought to nine years.

Bogosian has a goal and four assists this season and 53 goals and 141 assists in 636 regular-season career games.

His demotion saves Buffalo a little over $1 million in space against the salary cap and also frees up room on what's been a crowded blue line this season.

In a separate move, the Sabres recalled defenceman John Gilmour and goalie Andrew Hammond from Rochester. Gilmour provides Buffalo with a seventh defenceman a day after the team also demoted blue-liner Lawrence Pilut.

Hammond was recalled after starter Carter Hutton missed practice Saturday for what the team called a maintenance day.