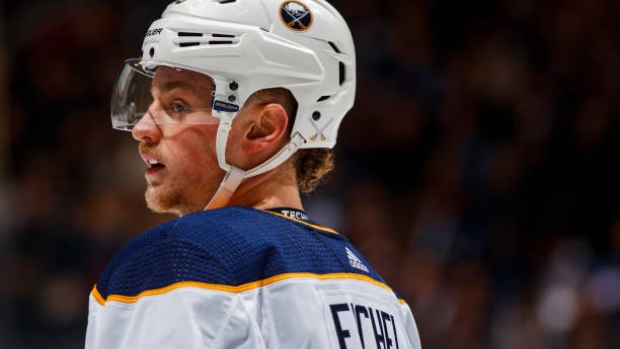 Buffalo Sabres captain Jack Eichel will start the season on long-term injured reserve as he remains in a holding pattern with the team on how to best treat his neck injury.

TSN Hockey Insider Darren Dreger reported Wednesday that there is nothing close on the trade front for Eichel, who has been looking for a trade throughout the off-season.

"Well, it’s tough to pinpoint a timeline but we do know there is ongoing discussions with Jack Eichel’s agent Pat Brisson and Kevyn Adams, the general manager of the Buffalo Sabres. They’re on good terms, they have an excellent relationship," Dreger said on Insider Trading. "We also know that Jack Eichel will start the regular season on LTIR. Now, he saw a team of specialists over the course of the off-season. Some encouraged the artificial disc replacement surgery; however, the Buffalo Sabres remain adamant that the fusion surgery is the best option.

"It’s possible that Eichel gets traded and has the disc replacement surgery under the blessing of a new club, but there’s no guarantee and it doesn’t seem like anything is real close on that front."

Eichel was limited to 21 games last season due to the neck injury and there has been a long-standing dispute with the team this summer over how to treat the injury.

The 24-year-old centre has been the subject of trade talk since the end of last season and his former agents released a statement in July trying to spur a trade. He switched agents to Pat Brisson in August.

"What's critically important to make sure is clear is that we're in control of this process," Adams said in July, prior to the statement from Eichel's then-agents. "We have a player under contract. We don't feel any pressure.

"If there's a deal out there that we feel is the right thing for the Buffalo Sabres, that's going to help us improve – whether that's improve right away or improve down the road, those are all the things weigh – we'd be open to it. But we're not in a position where we feel we're just going to do something to do it. That doesn't make any sense."

He has served as captain of the Sabres since 2018.