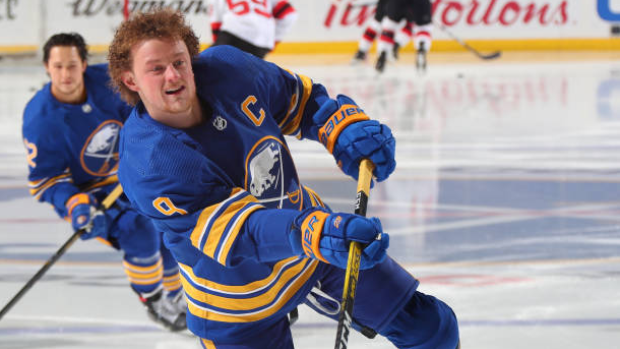 TSN Hockey Insider Darren Dreger reported this earlier this week that there are no pressure points for the Buffalo Sabres to trade deal Jack Eichel, and general manager Kevyn Adams reiterated that on Thursday as trade speculation continues to swirl around the team's star captain.

"What's critically important to make sure is clear is that we're in control of this process," he told reporters in a Zoom call. "We have a player under contract. We don't feel any pressure.

"If there's a deal out there that we feel is the right thing for the Buffalo Sabres, that's going to help us improve - whether that's improve right away or improve down the road, those are all the things weigh - we'd be open to it. But we're not in a position where we feel we're just going to do something to do it. That doesn't make any sense."

"What's critically important to make sure is clear is that we're in control of this process. We have a player under contract. We don't feel any pressure. If there's a deal out there that we feel is the right thing for ...

Eichel has been the subject of trade talk since the end of the regular season and Adams added that while trade talks "are continuing to go," they will not be rushed into a potential deal.

"We want players that want to be here. I'll start with that," he continued. "But we have players on our team that are under contract, and we aren't going to do something that we don't think makes sense for our franchise."

Eichel was limited to 21 games this past season due to a neck injury and later said there was a "disconnect" with the Sabres over how to handle the issue. Adams said in May that Eichel had not requested a trade, though the 24-year-old made it clear he was open to a move.